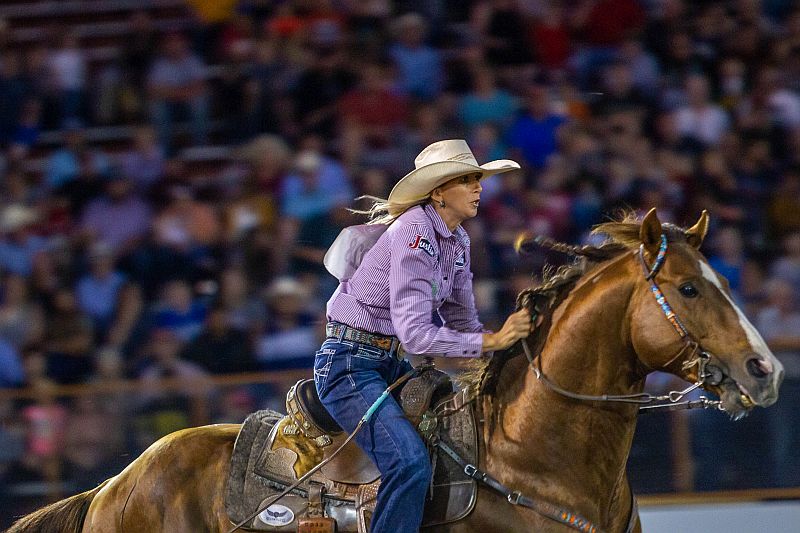 This time, it was 89 points aboard the Beutler and Son horse Nutrena’s Foxy Lady.

He was complimentary of the mare, a ten-year-old sorrel. “That horse is a little stronger, and pretty nice, really. She had those moves that made her a little more challenging. She was definitely the one you want to win.”

Before Foss left home, he put on the 2018 Buffalo Bill Rodeo buckle he’d won last year. “I pulled it out of the case and said, ‘I’ve never put you on before but you’re going back to where you came from.’ It turned out to be good luck.”

The 27 year old rancher joked that maybe North Platte should be his second home, because of his wins at the rodeo. “I’d love to (live in North Platte),” he said. “There’s plenty of good looking black cattle here, and it’s all ranch country.”

Foss is ranked seventh in the PRCA world standings.

The 26 year old cowboy rode the Beutler and Son Rodeo Co. horse Nutrena’s Rage for 88 points to win the 2019 title.

North Platte is just another string of good rodeos for the Winnemucca, Nev. man. “The last few weeks have been really good,” he said. “I’ve been drawing really good horses, and trying to keep things simple, and it’s worked out for me.” He’s won money at rodeos in Santa Maria, Calif. and Central Point Ore., among others in the last weeks.

Pollock is a latecomer to rodeo. He played baseball at the College of Southern Idaho in Twin Falls and didn’t get on his first bucking horse till he was twenty years old. When he got on one, he was hooked. “I knew that was what I wanted to do for the rest of my life,” he said. He took advantage of all four years of college rodeo eligibility, staying at the college till he was 24 and earning six associates degrees. “I got a lot of school under my belt,” he said, “which made my mom happy, too.”

Pollock is ranked nineteenth in the world standings.

North Platte has been the best part of bull rider Parker Breding’s week.

The Edgar, Mont. cowboy got bucked off at the rodeo in Newtown, N.D. on Friday, so his win at the Buffalo Bill Rodeo was appreciated.

He made the eight second buzzer on the Beutler and Son Rodeo Co. bull Bullet Proof for 83 points.

The twenty-six year old cowboy has made three trips to the WNFR and is hoping for a fourth trip this year. This year hasn’t been as good as previous years, but he’s still ranked third in the PRCA world standings with more than $82,000 won. “I haven’t won quite as much at this point as I had last year,” he said. “This year’s been a little slower but I’m figuring it out and getting on a roll again, and things are looking up.”

He’s done some “mental intervention,” as he calls it. “I had to go back to not thinking so much when I ride, and just trust that I know how to do it. That’s made a world of difference here lately.”

Breding is the son of five-time WNFR qualifier Scott Breding. His dad is proud of his son. “He doesn’t say those words, but you can hear the excitement in his voice when I call him with good news. He gets more excited than I am.”

The 2019 Trail Boss Award was awarded to Jerry Woodruff, D.V.M. A volunteer with the rodeo since 1991, Woodruff has helped with arena and rodeo production upgrades, construction of the rodeo committee shack, installationof the crow’s nest, new roughstock pens, new bucking chutes, and arena fencing. As a veterinarian, he has had an integral part in overseeing the animal welfare of the rodeo livestock and contestants’ performance horses. Woodruff is one of the many “silent” contributors who works tirelessly to make sure the details are taken care of for the rodeo.

NEBRASKAland Days activities continue until June 22. Next weekend’s highlights include the prime rib sandwich feed on June 18; Carnival Americana (through June 22); a concert on June 21, featuring Jake Owen with special guests the Casey Donahew Band and the Whiskey Bent Band; and a concert on June 22, featuring Kane Brown with special guests Lindsay Ell and Travis Denning.  Tickets are available online at www.NebraskalandDays.com. For more information, visit the website.

** All results are unofficial.