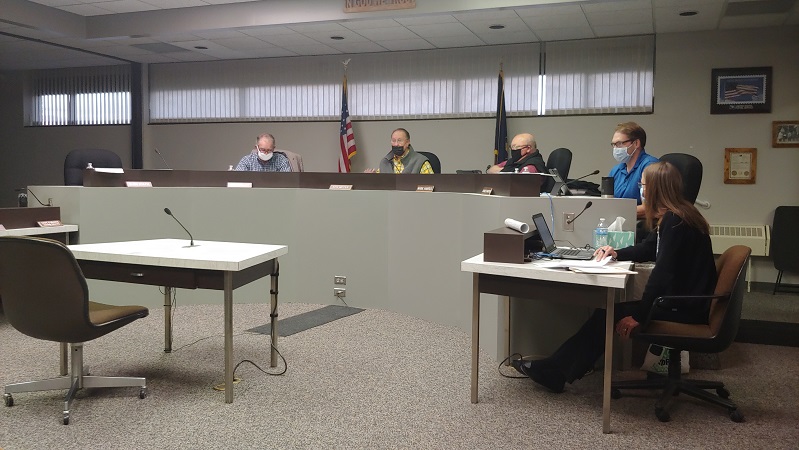 Following a lengthy discussion on mandates, Scotts Bluff County Commissioners have added their voices to the chorus of health care and other officials imploring the public to use a mask to help battle COVID.

Board members wrestled with the issue for about an hour Monday night discussing the legalities and efficacy of such a move before approving a slimmed down resolution emphatically asking county residents to wear a mask, and to follow the recommendations of public health to avoid the 3-Cs.

Board Chair Ken Meyer said County attorney Dave Eubanks had advised the board that state law did not give them the authority to mandate mask usage, and while Meyer wondered whether such a move would be met with more compliance or increased resistance among some area residents, he said people need to understand the virus threat is real and take personal responsibility. “We have a hospital sitting up here that’s full of patients, and they’re getting fuller every day. We have a hospital administrator that’s pleading that we need to do something,” said Meyer. “We can’t fix this as politicians, folks. We can’t waive a magic wand and make it go away.”

Over the weekend, the board and other area governmental leaders had met with local health care officials who were seeking a unified voice on the subject, especially on the issue of the need for masks.

Scotts Bluff County Health Director Paulette Schnell said approval of the resolution won’t fix the pandemic, but people do respect the board as leaders in the community. “If we have the same voice, the same message coming from all leaders across the Panhandle, people might take more notice, and that’s what we’re asking, “said Schnell, “is for people to take notice, to take that personal responsibility to take care of our community, because we are in a crisis. We are at a point where we can still do something to change this around, but if we don’t, we are going to be overwhelmed as a health system.”

Board members said they supported the primary message of the need to wear masks, but expressed some discomfort with  other items in the resolution as originally presented, as well as concerns that the goal of getting people to wear a mask would be lost if the document was too lengthy with so many other messages.

Tim Osterholm, Chief Operating Officer at Regional West Health Services, said the message of commissioners coming out in support of efforts to bend the curve with the use of masks and other recommendations provides hope when some may feel hopeless with the current situation. “I think the resolution, the letter from Regional West (last week), is just a step in saying ‘We can be united in the message’, and really it’s just changing some behaviors; wearing a mask, thinking about the size of groups we’re in, washing our hands,” said Osterholm. “It would be nice if we were just in flu season, saying we could wash our hands and that would take care of it. This is a virus that’s not following the plan that we’re usually used to, and I just think it’s important we come together and the resolution is just one way to do that.”