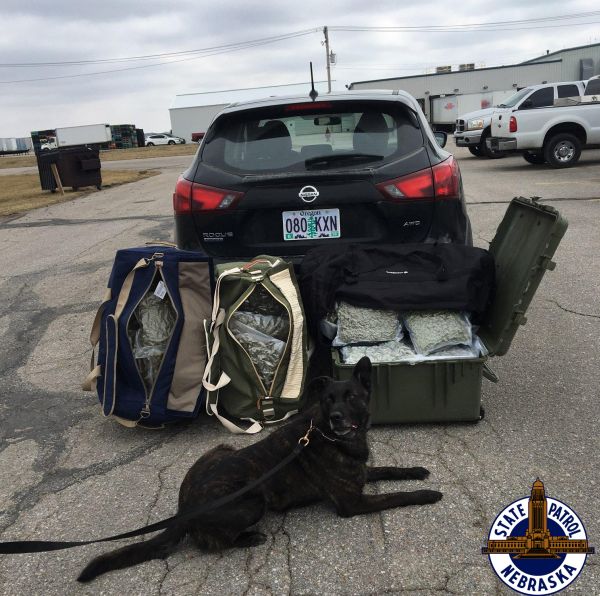 At approximately 11:45 a.m., a trooper observed an eastbound Nissan Rogue driving on the shoulder of Interstate 80 near Lincoln at mile marker 393. During the traffic stop, an NSP K9 detected the presence of a controlled substance coming from inside the vehicle. A search of the vehicle revealed 180 pounds of marijuana.

The driver, Richard Huckaba, 50, of Ruston, Louisiana, was arrested for possession of marijuana with intent to deliver and no drug tax stamp. Huckaba was lodged in Lancaster County Jail.

At approximately 2:00 p.m., another trooper performed a traffic stop on a Chevrolet Silverado after observing the vehicle fail to signal on the exit ramp of I-80 at mile marker 366 near Utica. During the traffic stop, another NSP K9 detected the odor of a controlled substance coming from inside the vehicle. Troopers searched the vehicle and located approximately 219 pounds of marijuana in the covered bed of the pickup.

The driver, Rebecca Jayne, 60, of Selma, Oregon was arrested for possession of marijuana with intent to deliver and no drug tax stamp. Jayne was lodged in Seward County Jail.