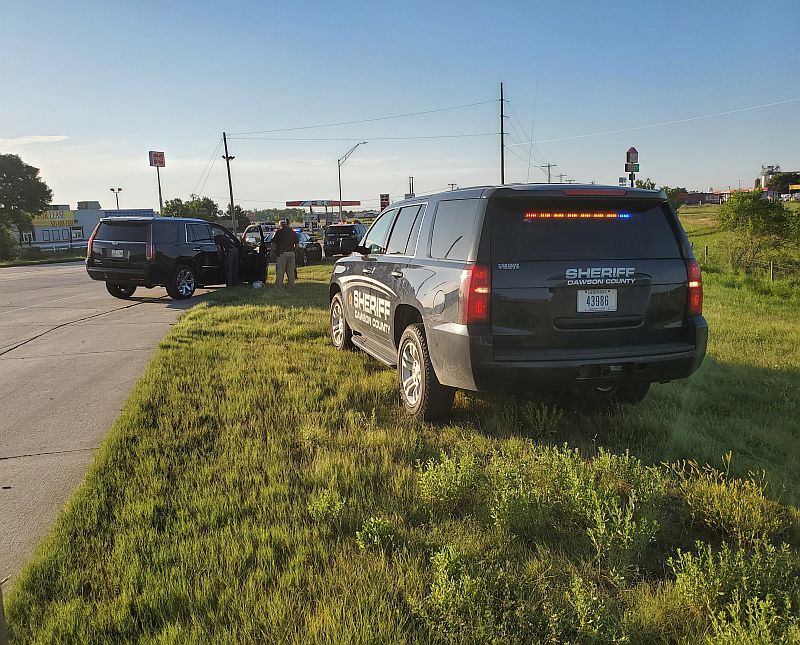 RRN/ A vehicle pursuit(black SUV to left) ended at the top of the Cozad Interstate 80 interchange Tuesday evening July 16, 2019.

Two people were taken into custody following a pursuit Tuesday evening on Interstate 80 through the eastern half of Dawson County. Nebraska State Patrol Sgt. Kyle Diefenbach said they acted on a report of a vehicle that was driving recklessly. A trooper found the vehicle on Interstate 80, east of the Elm Creek interchange. Sgt. Diefenbach says the trooper initiated a traffic stop based on an observation of the vehicle failing to maintain it’s lane. “At that point”, he said “the vehicle exited at Elm Creek and then, for whatever reason, made a U-turn(and) got back onto the Interstate and was pursued.”

Spikes were deployed at the Lexington interchange causing the right-front tire to deflate but, the SUV continued westbound to the top of the Cozad interchange and Highway 21 where it came to a stop. The Dawson County Sheriff’s Office and Cozad Police Department assisted in the incident. Further details on the two subjects and the nature of charges were not immediately available.