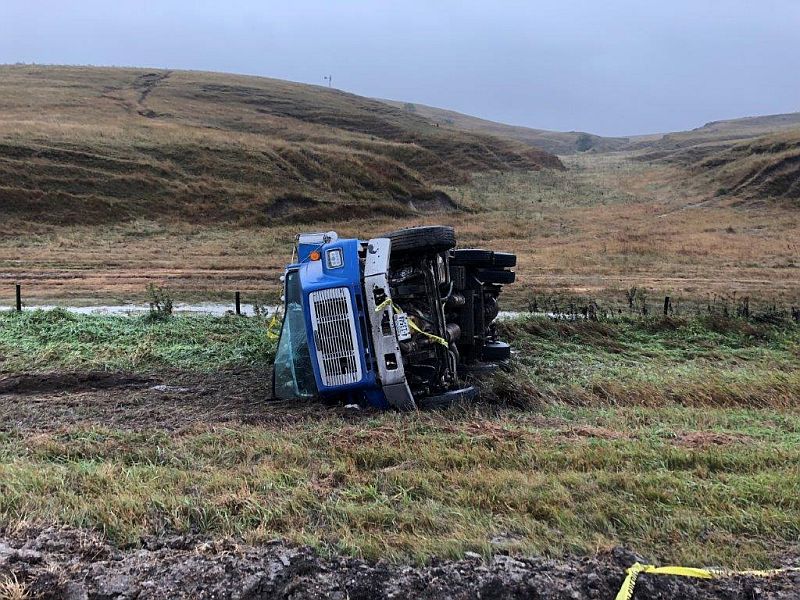 Courtesy/ Dawson County Sheriff's Office. A truck rolled onto it's side in an accident on October 1, 2019 in northern Dawson County. The driver was not injured and was wearing his seatbelt.

A Broken Bow man escaped injuries following a rollover accident late Tuesday afternoon on Highway 21, about 6 miles south of the Dawson-Custer County line. Dawson County Sheriff’s Lt. Tucker Case says around 4:35pm, a Freightliner truck, driven by 42-year-old Kenneth Loucks, was traveling northbound when it ran off the roadway, rolling onto it’s side. Seatbelts were in use. There was no cargo being hauled at the time.

A 36-year-old Ogallala woman escaped serious injuries in a one-vehicle rollover accident around 9:22am Wednesday morning on Interstate 80 about two miles west of the Cozad interchange. Dawson County Sheriff’s Lt. Tucker Case says Crystal Robertson was driving eastbound while attempted to grab an item. The Pontiac Grand Prix overcorrected after driving over rumble bars causing it to lose control and rolling several times. Robertson was transported to Cozad Community Hospital. Seatbelts were in use and she was cited on suspicion of Driving Under Suspension.