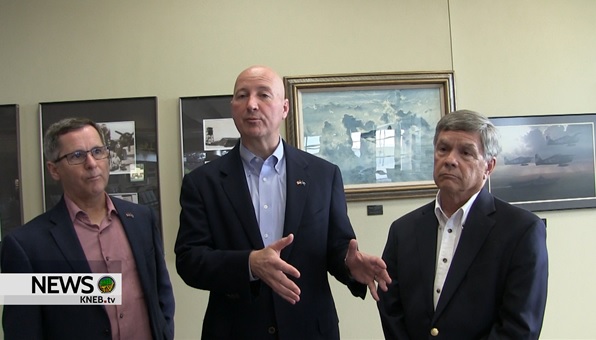 Governor Pete Ricketts was in Scottsbluff on Thursday, July 25, to meet with officials and producers about the breach in the Ft. Laramie Canal and tunnel collapse, which occurred on July 17.

Ricketts made an Emergency Declaration Wednesday, July 24, and said he has been in communication with Wyoming Governor Mark Gordon on fixing the tunnel.

The tunnel built in 1917 is 14 ft in diameter and carries water a half-mile through a hill under rangeland.

“We want to get that restored as quickly as possible,” he said. “We’ve been working with both irrigation districts to figure out the best solution.”

Governor Ricketts has also been in contact with Nebraska senators, representatives, and legislators.

Senator John Stinner of the 48th Legislative District was also at the meeting.

“A big concern for the producers I’ve talked to is whether crop insurance is available or not, and that is still to be determined,” he said.

Wellman said he’s been in contact with Martin Barbre, administrator with the USDA Risk Management Agency.

“They’re aware of the situation. We’re talking through with them whether it’s a covered cause or not. It will be their decision,” Wellman said.

The work on the tunnel is expected to take 20 days, but the irrigation districts are already repairing the 1,300 ft breach, along the Ft. Laramie canal.

If the temporary fix works, the engineers would then go in after the irrigation season and do all the necessary measurements to determine the pipe size to go back in and sleeve the tunnel.

Ricketts spoke with KNEB about the latest, and you can watch the full interview below.