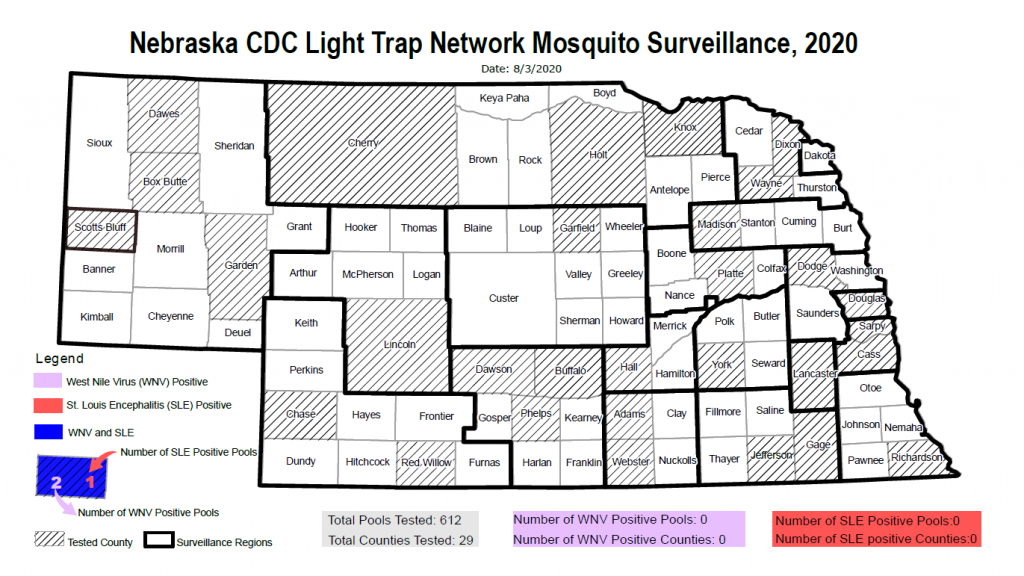 A common scourge this time of year, West Nile Virus, has yet to be detected in Nebraska, something public health officials say is very unusual as we approach mid-August.

According to data collected by the Nebraska Department of Health and Human services, no West Nile cases have been found in humans, horses or at the 612 monitoring sites in 29 counties across the state.

The most recent statewide trap index for all mosquitoes is down about 50% from the 5-year average, and down by two-thirds for the Culex variety that carries West Nile. Scotts Bluff County Health Director Paulette Schnell says the lack of cases and lower mosquito counts are highly unusual. “Nobody really seems to have an answer for that, other than the cycle you do see sometimes where they have a bigger season for a few years, and then they cycle down a little bit,” said Schnell. “There is kind of a pattern to that, but not necessarily one we were expecting this year.”

Schnell tells KNEB News while the southern half of the country has been more active for the disease, the northern tier of the U.S. has seen less and August is usually the month for the most West Nile activity in our region.

She says this may be the most quiet year for the illness since monitoring started in Nebraska, something public health officials are thankful for as they deal with the COVID-19 pandemic.

According to the most recent DHHS Arbovirus Surveillance Report for 2020, just a handful of travel-related mosquito-borne disease cases have been reported this year, including two malaria and two dengue cases.