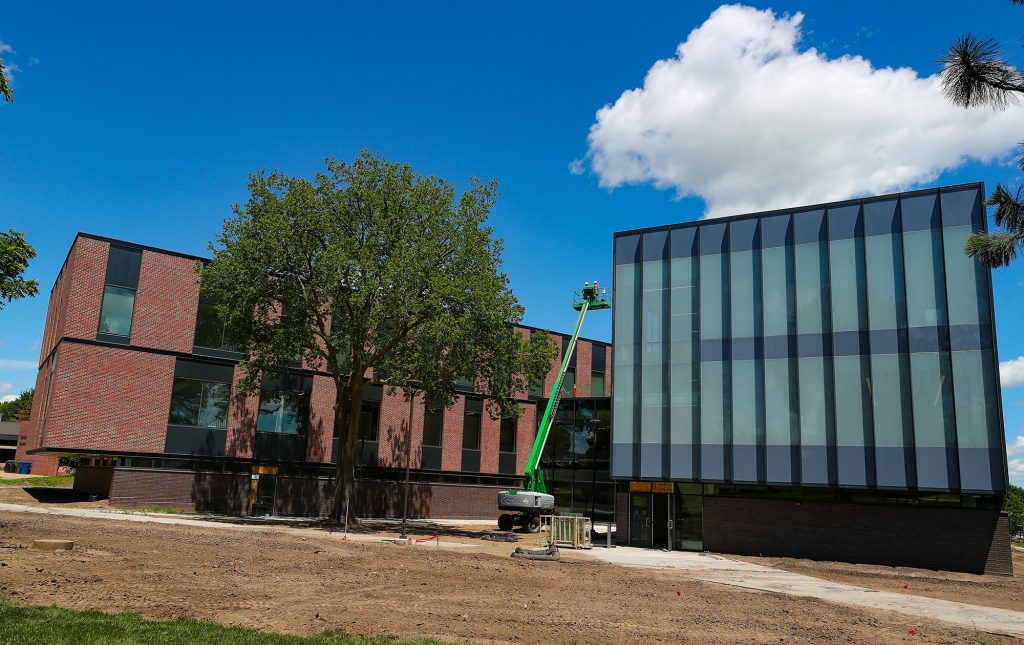 Discovery Hall, a 90,000-square-foot building located on UNK’s west campus, is on schedule to open ahead of the fall semester, which begins Aug. 24. (Photo by Corbey R. Dorsey, UNK Communications)

KEARNEY – The coronavirus pandemic hasn’t slowed progress on the University of Nebraska at Kearney’s newest building.

Discovery Hall remains on schedule to open ahead of the fall semester, which begins Aug. 24.

“We’re pretty much where we expected to be,” said Lee McQueen, director of UNK Facilities Management and Planning.

Some existing equipment has already been moved into the building, and new items are starting to arrive. Faculty are expected to begin transitioning to Discovery Hall in July.

“Everyone is excited to get in the new building,” said Tim Jares, dean of UNK’s College of Business and Technology. “Most of those from CBT who are moving into Discovery Hall are coming from Otto Olsen, so the change and improvement goes without saying. The new building truly is impressive.”

Located on UNK’s west campus, Discovery Hall features a mix of modern and industrial design, with plenty of natural lighting and open areas where students can study and interact, including a rooftop garden. The three-story building offers spectacular views of campus.

“Combined with the improvements we have planned for West Center, there will be ample space for students to spend their entire day on the west side of campus,” Jares said.

At 90,000 square feet, Discovery Hall is about twice as large as the Health Science Education Complex that opened in 2015.

The science, technology, engineering and math facility has lab and classroom spaces designed to meet each program’s specific needs while maintaining a level of flexibility for collaborative projects. Glass enclosures and balconies allow students, faculty and visitors to observe lab and instructional work from the outside the room.

“In Otto Olsen, everything happened behind a closed door or wall,” McQueen said. “In Discovery Hall, everything is out in the open.”

Discovery Hall will house programs from the industrial technology, cyber systems, mathematics and statistics, and physics, astronomy and engineering departments, creating a cross-disciplinary environment that promotes collaboration and innovation among the faculty, students and staff who share the space. A large, touchscreen video wall – roughly 4 1/2 feet by 20 1/2 feet in size – will allow for real-time interaction between people both on and off campus.

A number of events showcasing Discovery Hall will be planned for later this summer and fall.

The state-of-the-art facility is the final piece of a multifaceted project that replaces the 65-year-old Otto C. Olsen building, which has been on the state’s capital construction replacement list for more than 20 years.

Funding for the project came from renewal bonds and through state appropriation from LB957, which included the University of Nebraska Facilities Program of 2016. That appropriation directed deferred maintenance funding to NU facility replacement projects, including Otto Olsen.

The total price tag for Discovery Hall and an already completed expansion of UNK’s Fine Arts Building is $30 million.

Location: West of 19th Avenue between University Drive and U.S. Highway 30. It is on the west end of UNK’s campus, northeast of West Center and south of Ockinga Hall.

Replaces: Otto C. Olsen, which was built in 1955 and has been on the state’s capital construction replacement list for more than 20 years

Funding: It is paid for by renewal bonds and through state appropriation from LB957, which included the University of Nebraska Facilities Program of 2016. That appropriation directed deferred maintenance funding to facility replacement projects, including the Otto Olsen building.