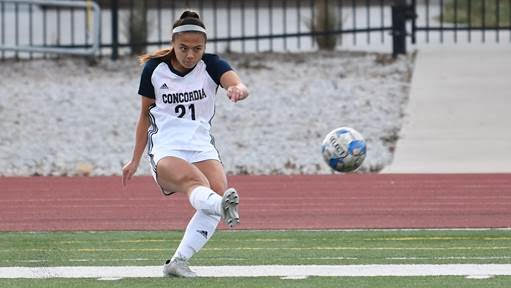 FREMONT, Neb. – It appeared the win streak would live on after the Concordia University Women’s Soccer team took a 2-0 lead to the halftime break on Wednesday (Nov. 4) evening at Midland. However, the Warriors forced extra time thanks to an 89th minute goal, ultimately resulting in the game ending in a 2-2 draw in Fremont, Neb. Defending GPAC champion Midland has played overtime contests in four of its past five outings.

Head Coach Thomas Goines’ squad entered the night with a four-game win streak. With Briar Cliff (7-0-1 GPAC) undefeated inside the conference, the Bulldogs (7-3-1, 7-2-1 GPAC) did not have much room for error in regards to the GPAC regular-season title race.

“We started off strong and played a really complete first half,” Goines said. “We found a way to grow into the game and came into the second half feeling confident. You have to give credit to Midland. They ramped up their pressure and our girls didn’t respond well. You could feel some of that confidence slip away. We lost some control in the second half. Midland was ready to roll.”

Concordia put both of its goals on the board in a short span occurring in the latter stages of the first half. Junior Mikeila Martinez broke a 0-0 deadlock with her goal in the 31st minute (assisted by Sydney Ross on a cross). Moments later, Martinez converted a penalty kick chance to provide a two-goal advantage. It marked the second time this season that the Fairfield, Calif., native has knocked in two goals in a single game.

Outside of those two goals, the Bulldogs fired only five shots. Midland (3-3-3, 3-3-3 GPAC) outshot Concordia, 12-8, for the night. On the lone shot of overtime, Bulldog keeper Lindsey Carley made one of her six saves. On the other end of the field, reigning GPAC Defensive Player of the Year Rachel Thigpen collected three saves.

Concordia was disappointed not to come away with the win after conceding a goal with just 1:02 left in regulation. Warrior goals came courtesy of Dana Gomez and Brittany Llanes. The way Midland dominated for a good part of the second half, the Bulldogs had been playing with fire. Concordia is now 6-2-2 over the last 10 series meetings with Midland. The Warriors remain a solid team despite graduating the prolific attacking duo of PT Perez and Nayeli Rodriguez.

“It was a challenging game. We could not find a lot of consistency,” Goines said. “Midland was able to take us out of rhythm. Our back line managed to absorb some of their pressure. We’ve had an injury here and there, but we have to make up for it. We’re taking it one step at a time.”

The Bulldogs are slated to play a makeup game at Presentation (0-9-2, 0-7-2 GPAC) at 12 p.m. CT on Sunday. The Saints have earned conference draws with Morningside and Doane.