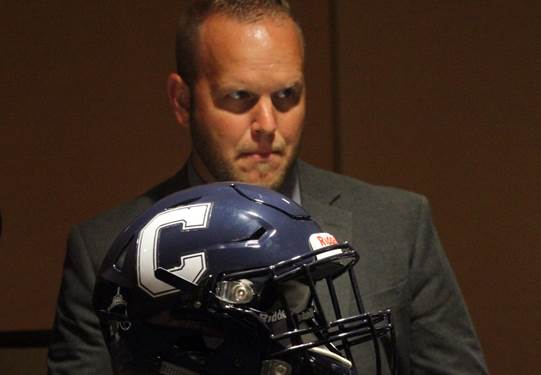 SOUTH SIOUX CITY, Neb. – As head coach Patrick Daberkow would tell you, the Concordia University football program flipped the page on the 2018 season just as soon as it finished. It just feels more official that the 2019 season has arrived now that the GPAC’s annual football media day event is in the books. The 2019 media conference unfolded at Delta Hotels by Marriott in South Sioux City, Neb., on Tuesday (July 30).

Both the coaches and the media picked the Bulldogs to finish exactly where they did a year ago – eighth in a conference consisting of 10 teams. In other words, Concordia is being told to prove it or else spend another offseason answering questions about what went wrong.

“If you don’t look back and gather lessons that were learned during the season then you’re losing out,” Daberkow said. “We’re always trying to learn from our mistakes and find ways to do things better. We’ve done a lot of things different to expect different results. A lot of it is gaining experience and being patient with that process.”

Now the countdown is on until Saturday, Sept. 7 when the Bulldogs will open up a new season with a 6 p.m. CT home kickoff versus rival Doane. The count is at 39 days as of July 30.

The quarterback situation has been mired in a state of flux for several seasons now. Last fall Daberkow used three different starting quarterbacks with Jake Kemp and Andrew Perea handling the bulk of the snaps. Both signal callers are back in 2019, but Daberkow says the competition is wide open heading into fall camp. Junior Blake Culbert and Lindenwood University Belleville transfer Christian Rawlinson have gotten a cup of coffee at the NAIA level. Culbert started a game last season and Rawlinson completed 9-of-12 passes for 109 yards and a touchdown in 2018. The class of incoming freshmen quarterbacks includes Wyatt Ehlers, who led Centennial Public School to a Nebraska state championship as a senior.

Said Daberkow in a side interview, “We believe in competition so we’re bringing in competition. We expect our quarterback play to be much improved from last year. It’s always just on the quarterback. They get a lot of the heat when things go south. We have room to improve offensively. We definitely have confidence in Coach (Reggie) Corbin to get that squared away.”

Assistant Reggie Corbin will take control of the offensive play calling this season. He will be tasked with adapting the program’s multiple formation scheme to best fit whichever quarterback emerges as the starter. The staff believes it has potential playmakers at the receiver position and already knows it has a workhorse running back in Ryan Durdon. Daberkow has identified improvement along the offensive line as the team’s “most important need” heading into fall camp.

There are plenty of variables in place for an offense that averaged only 15.4 points per game last fall. That number is likely to trend upward with a more experienced overall unit. Daberkow has confidence that Corbin’s influence will also lead to more productivity. Concordia hit teams with plenty of gadget plays in 2018. The hope is there will be less need for that in 2019.

“Reggie’s going to do a great job with the offense,” Daberkow said. “I’m really excited to see what he does and to work with him as far as what we want this program to look like offensively, how to put points on the board and how to work with the special teams and the defense. Not every offensive coordinator does that. That’s one thing that I love about Coach Corbin and our offensive staff. They work really well with our defensive staff so that we can win games as a unit.”

One key to offensive success will be getting senior running back Ryan Durdon loose in space – which was something he did not have enough of in 2018. Durdon’s average yards per rush went from 5.5 as a sophomore to 3.7 as a junior. Even so, he showed the same game breaking ability by piling up 1,439 all-purpose yards. With 2,068 career rushing yards, Durdon stands a strong chance of becoming the fourth player in program history to crack 3,000 for a career.

High praise for the backers

When mentioning personnel, Daberkow first pointed to the linebackers. That really should come as no surprise considering the level of production and experience returning this fall. A junior and an All-American who led the NAIA in tackles last season, Lane Napier is actually the youngest of the group. Napier is joined by seniors Riley Bilstein, Derek Tachovsky and Zac Walter in the projected starting unit. It’s fair to say they all know each other well.

“It helps a lot,” Walter says. “Three of us have been playing together since JV ball our freshman year. We room together, we have a house together. That chemistry is unbreakable and it shows on the field. You know that you do your job, the guy behind has his job and it’s just going to get done. We really rely heavily on each other.”

Said Daberkow, “We’re expecting a lot of production out of our linebacker group.”

A four-year member of the baseball team, Kaleb Geiger was all set to try his hand at college football last season before a preseason camp injury forced him to miss the entire 2018 campaign. Geiger is determined to give football a shot. He’s back for one year of eligibility. Geiger’s exceptional strength and power could make him a tough assignment in the middle of the Bulldog defensive front. Daberkow referred to Geiger as a “Bull in a China shop.”

Added Daberkow, “He’s got incredible strength, an incredible work ethic and his care factor is through the roof. He’s always going to be an effort guy and he’s a great leader. He’s a grown man.”

Walter on opening up at night vs. Doane

Zac Walter: “We’re very excited. Us group of seniors haven’t had a home night game since we’ve been here. We’re stoked, especially since it’s Doane. Anyone who is a Concordia fan knows what that game means to us. Having it be the first game on our turf under the lights is something special. We really look forward to being prepared for that.”

Concordia showed up at No. 8 in both the GPAC Preseason Coaches’ Poll and the GPAC Media Poll. You could ask him, but Daberkow really won’t have much to say about these polls. Instead here’s this …

Massey Ratings is one of the few (perhaps the only) sources that ranks all of the NAIA football teams in the preseason. Massey has the following preseason national ratings for each of the GPAC teams:

Buzz around the GPAC

Head coach Chris Bessler of Doane, Concordia’s first opponent, expects his 2019 squad to be a “little bit bigger, little bit faster” as compared to a year ago. The Tigers said goodbye to starting quarterback Jack Kalina but had two transfer signal callers who were in for the spring in what is an open competition. Bessler says there is no leader after 12 spring practices. Drake Davidson has most college experience. Bessler believes his team is close to being back to where the program has been in recent years.

Northwestern returns nine starters on offense and six on defense with all specialists back. “Our depth is the best we’ve had over the years,” says head coach Matt McCarty, who has a more veteran team than the previous two campaigns. Stars in quarterback Tyson Kooima and receiver Shane Solberg could rise to top of program all-time lists early in the season. Kooima has a “Brett Favre attitude where he feels like he can make every throw,” according to McCarty.

Jamestown will be led by alum Brian Mistro, the 20th head coach in program history. The Jimmies return quarterback Joran Mann and a stable of four running backs that all saw significant experience last year. Mistro is a good friend of previous Jamestown head coach Josh Kittell. Mistro does not lack for enthusiasm. He’s stressing his players to “be passionate about being a Jimmie.”

The entire secondary has to be replaced and star running back Tahj Willingham has moved on, but Hastings head coach Tony Harper is elated to return an experienced quarterback in Isaiah Jackson. Said Harper, “We have to put our guys in better position to make plays” in regards to a question about getting out of the middle of the pack in the GPAC. This is the first time the Broncos are bringing back an experienced quarterback since 2012.

Head coach Joel Penner began his media address by joking about how his Dordt program has placed two spots higher than where it was picked in the GPAC preseason poll each of his three years in Sioux Center. Penner discussed the momentum building inside the entire athletic department. The Defenders are tasked with replacing quarterback Brock Lamle but return prolific receiver Levi Jungling. University of Iowa transfer Noah Clayberg is listed as a running back, but will see time at quarterback.

Head coach Ross Cimpl brought plenty of comedy to his speech. “Whoever schedules that, I’ll buy them lunch,” said Cimpl of his Dakota Wesleyan team getting to host Hastings several years in a row. Cimpl also made mention of Concordia coaches seemingly having so many children near the start of football season – “That’s a total Concordia thing.” Cimpl expects better of his program after an uncharacteristic 2-9 season in 2018.

“The biggest question for us is to establish the running game early in the season,” said Briar Cliff head coach Dennis Wagner. Two transfers are the leading candidates to fill the running back role. Wagner has found it easier to get a foot in the door of recruits with the help of increased success on the field. The biggest strengths of the team are the receivers on offense and the line on defense.

Head coach Jeff Jamrog calls him Midland group the “most athletic team that we’re going to put out there.” He believes the Warrior special teams will be a difference maker. The Warriors also could get a boost from new defensive coordinator Vance Winter, who spent eight years as Concordia head coach. Said Jamrog, “He’s an outstanding coach, but a better person … our players love playing for him.” Jamrog also had high praise for Daniel Jahn, an all-conference offensive lineman.

Morningside returns nine starters on defense, which will help lessen the blow of graduating two of the nation’s top offensive performers in quarterback Trent Solsma and receiver Connor Niles. Head coach Steve Ryan points out that two players who caught 60+ passes last season are back. So too is Arnijae Ponder, who rushed for 1,683 yards in 2018. However, the defense may be the better unit. Said Ryan, “We’re definitely going to count on our defense a little bit more this year.”