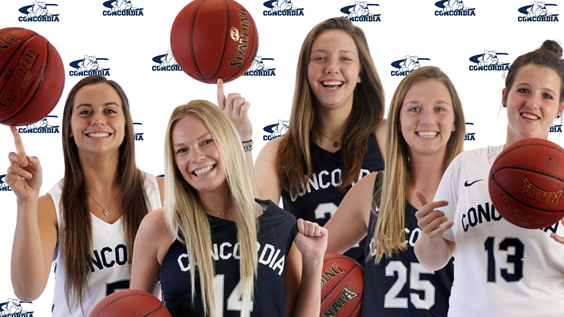 Outlook
Fans of the Bulldogs may need their roster sheets handy when the 2020-21 Concordia University Women’s Basketball season tips off. A revamped varsity roster includes five freshmen and a now-eligible transfer (via Briar Cliff). Yes, All-Americans Grace Barry and Philly Lammers and four additional impact seniors from the 2019-20 team have graduated. No, that does not mean this program is starting from scratch.

Every program in the country, at any level, would be hard-pressed to achieve what Lammers and company did over the past four years, which included eight total GPAC titles and a national championship (three national semifinal appearances). The run with that particular class may be over, but there’s just as much excitement about what’s next. This year brings a new challenge for Head Coach Drew Olson, who enters his 15th season at the helm.

“I’m very motivated to prove that we can keep being as successful as we’ve been,” Olson said. “It’s a really talented group and it’s fun to have so many younger players to teach and mold. I think that’s a fun challenge for us.”

The team chose “One Heart” (theme verse of Romans 15:5-6) as its motto for this season. It’s a theme that emphasizes team over individual (“with one mind and one voice”), something Bulldog Basketball has always been about. It’s that type of healthy mindset that helped spur Concordia to No. 1 NAIA Division II national rankings at the close of both the 2018-19 and 2019-20 seasons. In the familiar system that Olson has used to near perfection, the Bulldogs hit their opponents hard with wave after wave of athleticism while pushing the tempo.

At the top of Concordia’s list of athletes is Taylor Cockerill, who is back after a knee injury sidelined her for the entirety of the 2019-20 campaign. Lest we forget, Cockerill led the national championship team in scoring (15.4 ppg) and has the ability to be one of the most dynamic guards in the nation. Among other top returners, 6-foot-1 junior Mackenzie Koepke (8.2 ppg in 2019-20) moved into a starting role last season and should only get better.

Veterans like Cockerill and Koepke have experienced a lot of winning and they don’t plan on that changing. “We miss them and they were a huge part of this program,” Koepke says of the 2019-20 senior class. “What they accomplished in their four years was incredible. Even though they’re gone, there’s that standard. We have the phrase, ‘tradition never graduates,’ and we talk about that. The legacy they left isn’t gone. The expectation of being as excellent as they are is still there.”

Everywhere the Bulldogs go, their reputation precedes them. On the surface, it might sound odd that Concordia is ‘only’ ranked second in the GPAC preseason poll and ‘only’ ranked 11th in the NAIA national poll. The runner-up placement inside the conference likely has something to do with the firepower Dordt returns and the aforementioned departures from the Bulldog roster. For a change, Concordia can kind of, sort of play the underdog card.

It would be unwise to take a team lightly that features someone of Cockerill’s ilk. As a sophomore, Cockerill turned in a 40-point game and a 19-point fourth quarter in a national tournament game. She’s big time. “She’s a huge part of our team this year,” Olson said. “I think the team is going to be a reflection of her. When she’s confident and playing well, everybody’s going to rally around that. She knows that she’s got to be the vocal leader on the team and I think she’s very capable of that. She’s ready to have that challenge.”

Cockerill (a junior in terms of eligibility) is technically part of a very small senior class. Meanwhile, there are four members in the junior class, which is headlined by Koepke. The Lincoln Lutheran alum has drained 130 3-point field goals over two seasons. Her length is a major strength on both ends of the floor. The class also includes Rebecca Higgins, Rylee Pauli and Chloe Schumacher. All three averaged right around 4.0 points per game last season. Pauli could very well wind up leading the team in rebounding.

Faith Troshynski has never suited up for the Bulldogs, but she actually has played in more college games than anyone on the current roster. Her arrival gives Concordia another perimeter scoring threat. In three seasons (93 games) at Briar Cliff, Troshynski averaged 6.3 points and shot 34.4 percent from 3-point range. Says Olson, “What she brings is that maturity and leadership. She gives us a calming presence just because of the experience she has.”

Still relatively inexperienced, sophomores Taylor “Willy” Farrell and Averie Lambrecht should factor into the rotation once again. Farrell missed time last season due to an injury that occurred at CIT, but she had already proven herself as a sharp shooter. Farrell sank 31-of-61 tries from 3-point range as a freshman. In sum, that adds up to eight players who understand what it’s like to go up against GPAC competition.

Then there are the freshmen. The point guard role held down by Amazing Grace over the past two seasons may be handed to a rookie – or even multiple rookies. The freshman class is deep in speed, quickness and 3-point shooting. The name Taysha Rushton (Lubbock, Texas) will become a familiar one to followers of the program. Tantalizing would be an appropriate word to describe her potential within a system that suits her skills extremely well. Also watch out for the likes of guards Kendal Brigham (Wahoo, Neb.) and Bailey Conrad (Tea, S.D.).

“It’s a really talented group,” Olson said. “They have a lot of toughness and fight in them, but they have to get that experience. I think that’s why they rely so heavily on TC to be that presence and give them that confidence to be out there. There are several of them that are going to make some huge impacts on our team this year.”

Considering the new faces and evolving roles for returners, there certainly are plenty of unknowns. The dynamic of the NAIA shifting to one division for basketball also means the road to a national championship has more obstacles. In this new NAIA basketball world, are the Bulldogs a top 25, top 10 or top five team?

That’s going to be settled on the court. No matter the opponent, Olson’s program has never been one to back down. (Some might recall the double overtime game last season at Creighton). Says Koepke, “I feel like our team is maybe underestimated a little bit just because that great class has graduated. I just know that our team works well together and all the girls work hard. We’re here to prove that we are just as good as years past.”

In the national poll released this week, Concordia landed behind three former NAIA Division II members in No. 3 Marian (Ind.), No. 7 Southeastern (Fla.) and No. 8 Dordt. There is always a certain level of guesswork that goes into formulating a preseason poll.

“The preseason rankings – I don’t take a whole lot of stock in those,” Olson said. “Just because all of the unknowns. It’s even more (unknown) because of the one division and because some teams won’t even play early on (due to COVID-19 restrictions at conference/school levels). I think we are viewed a little bit differently and it gives us a lot of motivation. We’re excited to prove that we’re still Concordia. We’re still going to be a tough out.”

The Bulldogs are slated to open up the 2020-21 season at the annual Cattle Classic set for Nov. 6-7. The opponents will be Carroll College (Mont.) and Bellevue University.