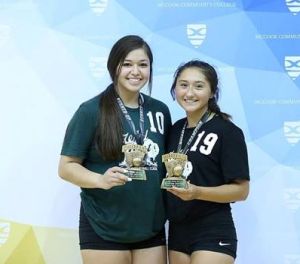 MVPS were the East Side’s Jennifer Nava, of Lexington, with one kill and 10 digs and the West Side’s Madison Mendoza, of Ogallala, who had two kills, seven digs and 21 assists.

It was a battle of the best of the best Saturday at the Peter and Dolores Graff Events Center in McCook. When it was all over and the dust had cleared, it was ultimately the West Side’s skills and determination that came out on top. This year marked the third annual Wild West All-Star Volleyball Classic hosted by the McCook Community College Volleyball Team. Players came from all over Southwest Nebraska to compete. They were nominated by high school coaches, then, through process of elimination, placed on either the East Side Team, coached by Athena Messinger and Nick Nothnagel, or the West Side Team coached by MCC alum Dylann Bylund. In the end, the West Side swept the East Side in a 3-0 win with match scores of 25-15, 25-11, and 25-21.

The MVPS were the East Side’s Jennifer Nava, of Lexington, with one kill and 10 digs and the West Side’s Madison Mendoza, of Ogallala, who had two kills, seven digs and 21 assists.

This was our third year of running this all-star match, which was previously known as the Sertoma,” said Hayley Kobza, MCC head volleyball coach. “We try to change it up every year and hope we can continue to make it better for the players and the fans. The MCC Lady Indians and I would like to thank all of the sponsors of the all-star players that made this event possible. We also owe a huge thank-you to everyone who volunteered their time to make this event run smoothly.”