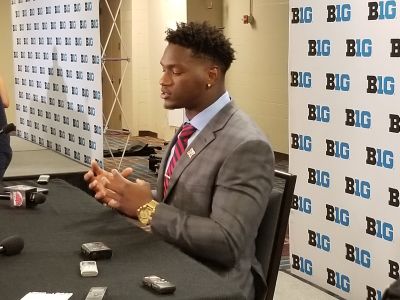 One of the top returners for the Nebraska defense this year is inside linebacker Mohamed Barry. Last season as a junior he flourished in Nebraska’s new 3-4 system as he registered a team leading 112 tackles and was named third team all conference. He says he takes a lot of pride in playing that position for the Big Red.

Barry, The Grayson, Ga., native led the Huskers and ranked second in the Big Ten with 112 tackles, including 55 solo tackles, and added 11 tackles for loss and two sacks from his inside linebacker position. His 112 tackles were the most by a Husker since NFL All-Pro Lavonte David totaled 133 stops in 2011. Going into his senior season he has been named to the Butkus Award Watch List as that award is given each year to the best linebacker in the country.