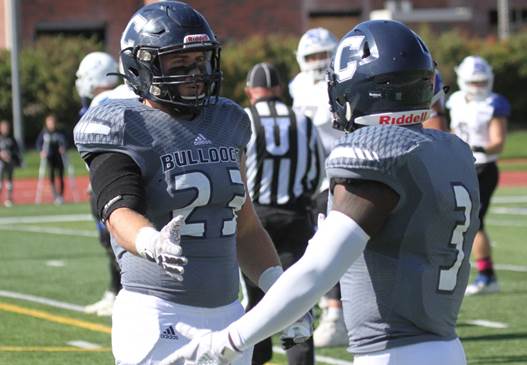 SEWARD, Neb. – A week after mudding through slop in a four-overtime contest at Jamestown, the Concordia University football team returned to its home turf on a sunny and breezy Saturday (Oct. 12)in Seward. The Bulldogs again leaned upon a defense that racked up six sacks in paving the way to a 24-17 win over Dakota Wesleyan. It marked the third year in a row that the Tigers have ventured to Bulldog Stadium.

It’s been a roller coaster of a six weeks for head coach Patrick Daberkow’s squad, which is now 3-3 overall and 3-2 in conference play. Five of Concordia’s six games have been decided by a touchdown or less.

“It’s good to be home. It’s good to get a win under our belt,” Daberkow said. “There are a lot of things that we can learn watching film after this. We left a lot on the table, I felt like. The way our defense is playing, we feel like we can play with anybody.”

The lack of a running game offensively kept the Bulldogs from pulling away from Dakota Wesleyan (1-6, 0-5 GPAC). But this one felt pretty comfortable for the home team when quarterback Jake Kemp delivered his third touchdown toss of the day to put Concordia up 24-10 at the 9:30 mark of the fourth quarter. Kemp twice connected with receiver Lane Castaneda on scoring plays, covering eight and 12 yards.

The onus was placed on the right arms of Kemp and Tiger quarterback Zachary Lester. There were just a combined 15 rushing yards on a day that saw plenty of defensive penetration in the backfield. Dakota Wesleyan was forced to abandon the run game with standout back Luke Loudenburg (six carries for eight yards) getting stonewalled by linebacker Lane Napier and company.

Up front, the Tigers struggled to deal with defensive end Aaron Rudloff, who was credited with a pair of sacks. Even Kemp had to tip his hat to the work of his teammates on the other side of the ball.

“The defense is so much fun to watch,” Kemp said. “I tell them every day. We practice against the No. 1 defense in the nation. It’s fun to watch them go create turnovers and get us the football. We love them and they always have our back.”

The grittiness of the defense was on full display on Dakota Wesleyan’s final possession of the first half. The Tigers had first and goal inside the one-yard-line and still failed to punch the ball in the end zone. On third and goal, linebacker Riley Bilstein came darting in to make a stop for a three-yard loss. Dakota Wesleyan wound up settling for a Tate Gale 21-yard field goal that cut the Bulldog lead to 10-3 at the half.

Lester and the Tigers were just pesky enough to hang in the contest. While filling in for starter Kiel Nelson, Lester led an eight-play, 61-yard drive in the final minutes to give Dakota Wesleyan a shot. The drive was capped by Lester’s 32-yard strike to Garrett Determan. On the ensuing kickoff, Brady Fitzke recovered the onside kick to ice the game.

For all that Napier has accomplished in his career, he had never picked off a pass until snaring one in the end zone in the fourth quarter on Saturday. Napier deservedly gets a lot of praise, but Concordia’s defense is playing well at all levels.

“We just take it play by play,” Napier said. “They’re running back is small, but he’s good. He’s fast and explosive. We talked about shutting him down and then they started doing a little quarterback rollout so we had to make a few adjustments on defense. We gave up a few big plays that we’ll go watch film on and see what we did. Other than that, I thought we played pretty well.”

Not only did Castaneda catch two touchdown passes, he also make a critical 53-yard reception on the final Bulldog scoring drive. Cayden Beran hauled in nine passes for 130 yards while Kemp finished the day 19-of-38 for 289 yards (one interception) to go with the three touchdown tosses. Ryan Durdon (21 rushes for 47 yards) was again bottled up in the run game, but he did make a nifty run on a 15-yard touchdown grab in the third quarter.

There were plenty of noteworthy performances on the defensive side of the ball. Napier led the team with nine tackles, including two for loss, while moving past 300 career tackles. Bilstein and Johnny Johnson collected seven tackles apiece and Peyton Mitchell broke up four passes. On special teams, Korrell Koehlmoos blocked a punt (Concordia failed to turn it into points).

Dakota Wesleyan has been a struggling program of late. The Tigers remain winless with the GPAC, but may have found something with Lester, who threw for 301 yards and two touchdowns. Spencer Neugebauer had nine receptions for 117 yards and a score.

At least on paper, the schedule really gets challenging from here on out. Next Saturday (Oct. 19) the Bulldogs will host seventh-ranked Northwestern (5-0, 4-0 GPAC) at 1 p.m. CT. It will be Military Appreciation Day at Bulldog Stadium.

“Nothing changes as far as your preparation,” Daberkow said. “We have some good teams coming up down the road, but we’re not looking outside of Sunday and what we can do in the next 24 hours as far as getting our guys back healthy. We’ll start dissecting film on Northwestern tonight and tomorrow morning. For now we’ll focus on doing one thing right at a time.”