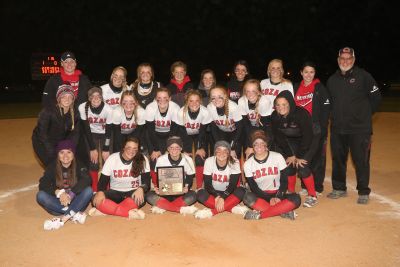 Kearney- A long day and night of softball came to end as Cozad edged Kearney Catholic 14-12 in the C6 District Title game on Saturday night. The game was tied at 12 before Cozad scored two unearned runs late that proved to be the difference. Cozad and Kearney Catholic played a total of three times on Saturday. The Haymakers won the first game, before Kearney Catholic forced a winner take all third and final contest. Saturday’s championship game saw a total of 31 hits between the two teams with Cozad collecting 16 while Kearney Catholic had 15. Reagan Armagost was the winning pitcher for Cozad as she allowed 11 hits, nine runs over five and two-thirds innings, striking out seven. Gracie Schneider threw one and one-third innings in relief out of the bullpen. Haley Cargill hit a huge home run for the Haymakers in the sixth. Jercey Irish, Tayler Chytka, Armagost, Emma Coen, and Cargill all had multiple hits for Cozad in the win. For the day Irish went 4-for-5 at the plate. Cozad and Kearney Catholic will meet yet again at the Class C Tournament that begins on Wednesday in Hastings. That game can be heard on KAMI Country Legends. Click here for complete state bracket.