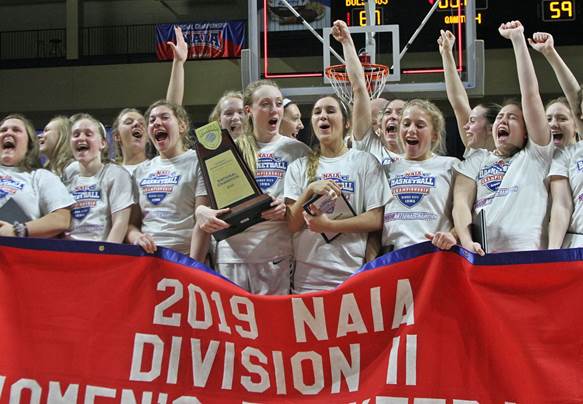 SIOUX CITY, Iowa – This is the moment the Concordia University women’s basketball program has been waiting for. For the first time in school history, the Bulldogs were the ones celebrating when the confetti streamed down from the Tyson Events Center rafters. Tears of joys flowed for senior Quinn Wragge, who couldn’t have asked for a better ending to her college career. Concordia cut down the nets after a 67-59 win over second-ranked Southeastern University (Fla.) in the NAIA Division II Women’s Basketball National Championship Game on Tuesday (March 12).

Throughout the tournament, there was a growing sense that this was their time. Thirteenth-year head coach Drew Olson’s program had struck out in national title game appearances in 2015 and 2018. This time around, the Bulldogs focused – and they finished.

“Thinking about all that we went through last year and all the hard work it took to get here, I’m just so proud and so happy for them,” Olson said. “I’m thankful I get to be their coach. It’s more about the players. I’m just so happy they get this feeling. It’s really surreal honestly.”

The NAIA Division II National Coach of the Year, Olson turned the keys over this season to transfer Grace Barry at the point guard position. She delivered in a big time way. She posted a line of 15 points, seven assists and four steals in the title game on her way to being named the Tournament MVP.

Barry and company never flinched after an 11-3 deficit out of the gate. For some it might have brought flashbacks to last year’s championship game when rival Dakota Wesleyan made it a painful night for Concordia. Consider the demons exercised.

“It was just an incredible feeling to be able to do it with such a great group of girls,” Barry said. “We’ve been talking about it since the summer workouts. We finally got it done.”

Barry spurred a 17-0 run in the first quarter to ensure that this would not be a repeat of a year ago. The Bulldogs just had to find a way to neutralize the size of Southeastern, which rolls out a starting five of players all 5-foot-11 or taller. On this night, the Fire stayed tight with the three-ball (12-for-29 from 3-point range). Like the semifinal win over Northwestern, this one hung in the balance for nearly all of 40 minutes.

Concordia sewed it up on the defensive end holding Southeastern without a single point over the last 2:54 of game time. The lockdown effort on that end turned a 61-59 lead into a 67-59 final score. Barry netted a pair of free throws in the final 30 seconds and a Fire turnover put the finishing touches on the championship. With four seconds remaining, Wragge checked back in to a standing ovation.

“From the day I came here this has been the goal,” Wragge said. “This is what this program has wanted for so long. To be a part of that with these amazing girls is incredible. It’s everything that I’ve wanted from this.”

It may have turned into more of a half court contest that the Bulldogs would have liked (12 turnovers apiece), but that was just fine on a night when Southeastern (31-3) had a grand total of 22 points in the second half (six field goals during that time) and shot only 35.7 percent for the game. Even an 18-point effort from Makenzie Cann couldn’t save her side, which reached the national championship final for the first time in program history.

Barry was joined in double figures by three teammates in Taylor Cockerill (13), Philly Lammers (11) and Wragge (11). Lammers recorded another double-double by grabbing 12 rebounds. MacKenzie Helman canned three big 3-point shots off the bench. Even with the height disadvantage, Concordia outrebounded the Fire, 37-32.

It all added up to the first basketball national title, men’s or women’s, in the history of Bulldog athletics. The business started by the greats of the past was finished. Olson made it clear that was a celebration to be enjoyed not just by the current players, but those of the past who helped build the program up to the point where something this was special was possible.

Olson channeled his inner Ric Flair while on the postgame stage, letting out a “Wooooo!” Said Olson, “We say tradition never graduates. We’ve had some amazing teams that haven’t been able to do this, but we’re here because of them. We accomplished something that’s for everybody. It’s for our alums, it’s for our past teams, it’s for our fans and our students. I love Concordia.”

For a program with staying power, the 2019-20 team will have the ability to make a run just like this one. It will move on without Wragge, an all-time great. By the end of the night, Wragge moved up to No. 3 on the school’s all-time scoring list. She wants everyone to know how much she loves Concordia – and her coach.

Said Wragge, “I love Coach Olson. I can’t say enough good things about him. He deserves this. He has gotten this program here so many times and to finish that for him means so much to me.”