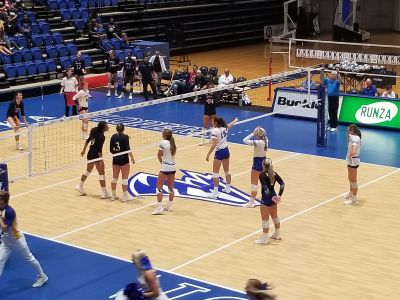 UNK (12-0, 0-3) remains unbeaten while the Jets, from Wichita, are still looking for win number one this year (0-12, 0-3). Newman is a first-year MIAA member after playing in the now-defunct Heartland Conference.

There were just five ties and two lead changes with most of the close playing coming in the third set. The Lopers out hit NU by almost 200 points, had 16 more kills and six more digs. But the big advantage came at the service line where UNK was plus seven. The aces came from three players as Squiers had five, sister Maddie Squiers (Kearney) served up three and senior outside Julianne Jackson (Bonner Springs, Kan.) added one. This marks UNK’s sixth match between seven and nine aces. They have 63 for the year and are up to 1.6 per set.