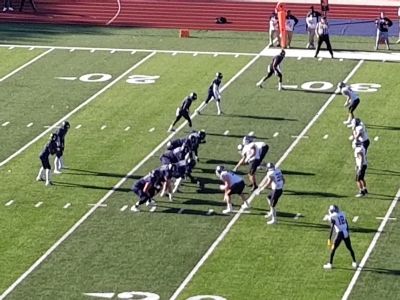 Kearney, Neb. – Nebraska-Kearney ran for 393 yards and five touchdowns and shut down the nation’s third leading rusher in a 44-0 win at Lincoln University Saturday afternoon in Jefferson City, Mo.

The Lopers (4-2) win a second straight game while the Blue Tigers (0-6) are still searching for its first win of 2019. The competition rockets up next week as No. 7 Northwest Missouri State comes to town; the Bearcats (6-0) blasted No. 15 Pittsburg State, 38-17, today in Arrowhead Stadium.

This is UNK’s second shutout as an MIAA member (2012-pre.) as it blanked Missouri Southern State, 45-0, in last year’s opener. The 147 yards put up by Lincoln is the eighth fewest by a Loper opponent in the Division II era (1990-pre.) and the fewest yards allowed by the “D” in an MIAA game.

Now 2-1 all-time vs. the Blue Tigers, Kearney got off to a bit of a slow start as it led just 6-0 after the opening quarter. Head coach Josh Lynn used some trickery as junior back Dayton Sealey (Hastings St. Cecilia) tossed a 33-yard pass to redshirt freshman receiver Aubrey Marschel-Parker (Aurora, Colo.) on 4th and 5 from the LU 38-yard line. Two plays later redshirt freshman quarterback TJ Davis (Colorado Springs) scored from two yards out but the Blue Tigers stopped junior linebacker Travis Holcomb (Cairo) trying to run for two points on the PAT.

Punting on two of its first three drives the Lopers made up for lost time by scoring TD’s on three straight second quarter possessions. Each drive covered at least 71 yards and this effort made it 27-0 at the break. Senior back David Goodwin (Lauderhill, Fla.) had scoring runs of 22 and 27 yards with Sealey having a career-best 71 yard scoring scamper at the 3:33 mark of the first half.

Lincoln sophomore back Hosea Franklin, a 5-7, 180 pound bowling ball, was held to a season-low 49 yards on 15 carries before limping off the field late in the third quarter. He came in averaging 161 yards per game and 7.4 yards per carry. Reserve back Tori Hicks managed 55 yards on nine carries in replacing Franklin.

For the third time this year UNK had more than one player reach 100 yards rushing. Sealey (138) reached his career-high total on only seven carries with Goodwin (115) having 11 attempts. This is Goodwin’s second straight 100-yard day and the fourth time in 2019 he’s gotten to the 90-yard mark. Next, Davis had 13 totes for 59 yards with six others running the ball at least once.

In the air Davis has his best day as a Loper, going 5 of 9 for 111 yards. Columbus redshirt freshmanMichael Koch had three catches for 69 yards with Sealey netting 49 yards on two grabs.

Lincoln finished the day with 41 carries for 112 yards (2.7 avg.) while two QB’s combined to go 7 of 20 for 35 yards and one interception. That passing total is the lowest by a Loper MIAA opponent and the fourth fewest yards in UNK’s D2 history.