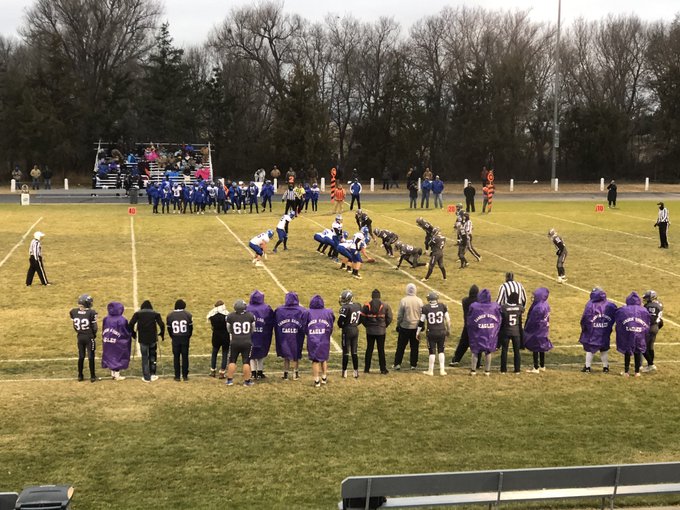 OSHKOSH – In the battle of the Eagles in the second round of the D2 playoffs, Overton soared past Garden County, 36-12 on their way to the third round.

Garden County took the opening kickoff 68 yards to the nine yard line and four plays later punched it in for their only lead of the night. Overton responded on their opening drive as Elijah Heusinkvelt scored one of his two touchdowns to tie the game. It would be the first six of 36 unanswered points that would give Overton control for good.

Overton had the tall task of trying to slow a Garden County rushing attack that had ran for over 3,000 yards and had two 1,000 yard rushers. The Eagles rose to the occasion, holding their second leading rusher to only two yards and their leading rusher to less than 75 yards on the ground while virtually eliminating any passing attack. Overton’s defense constantly found themselves in the backfield with seven total sacks and multiple tackles for loss. Addi Vance added an interception in the second quarter while Wyatt Ryan forced and recovered a fumble in the third quarter.

Ryan Lauby found the endzone three times for Overton on 37, 2 and 52 yard rushing touchdowns. He ended the day with over 200 yards rushing. Ryan Johnson connected with Heusinkvelt for a 27 yard touchdown pass. Only the second touchdown pass for Johnson this season. Heusinkvelt finished with another 100 yard plush rushing performance and two total touchdowns.

Garden County found the endzone on a one yard rushing touchdown from quarterback Austin Dormann and a 41 yard pass from Dormann to Colton Holthus. The Eagles forced two Overton turnovers.

Overton will travel to Wolbach to play Central Valley on Tuesday. Garden County’s perfect season ends with a 9-1 overall record.