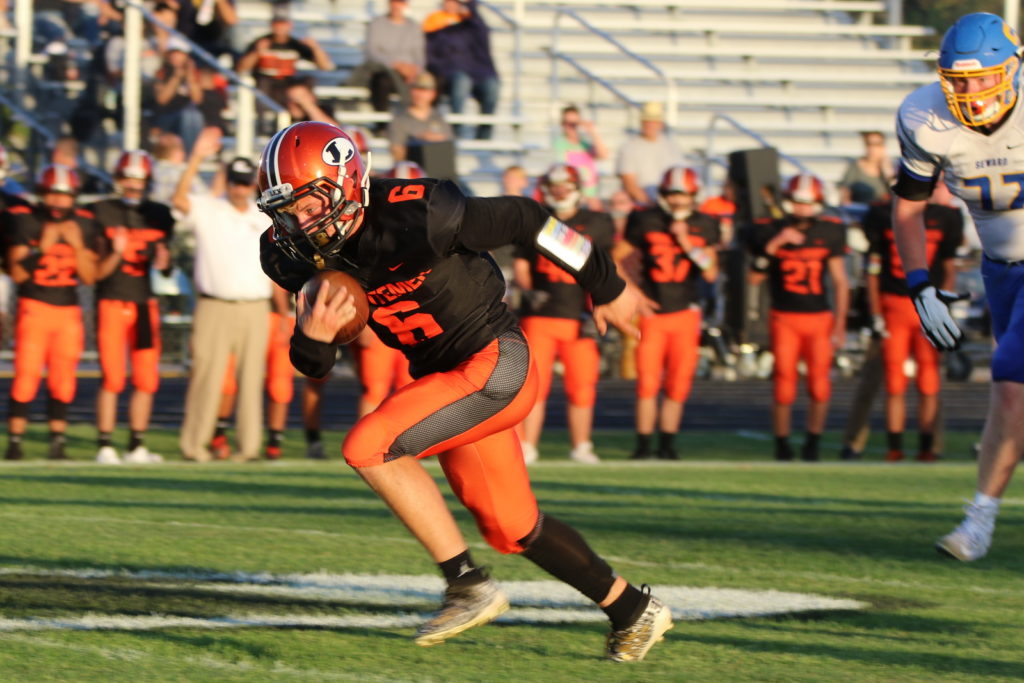 LEXINGTON – The Seward Bluejays survived an ugly game Friday night with Lexington, beating the Minutemen, 35-14. In total both teams turned the ball over eight times and had a whopping 26 penalties for 315 yards.

Seward grabbed the first lead on a 20 yard rushing touchdown by Tyson Franklin. Lexington would answer early in the second quarter as Caleb Carpenter threw a 19 yard touchdown pass to Ean Bailey, tying the game. The Bluejays would grab a touchdown lead heading into the locker room on a two yard rushing score by quarterback Ben Myers. In the first half, Carpenter threw one interception as did Seward backup QB, Gavin Sukup.

The second half is when things really went down hill for Lexington. Getting the ball to start the third quarter, Carpenter fumbled on the third play of the half. Seward capitalized on a six yard touchdown pass from Myers to Josh Sagehorn. The ensuing Minutemen drive would have the same outcome as Carpenter fumbled. Myers ran it in for a score from two yards out for the Bluejays. Seward would give it up in the third on a fumble by running back, Hunter Novacek. However, Lexington gave it back after an interception. Seward gave it right back to Lexington on an interception thrown by Myers, but Lexington gave it right back on another interception thrown by Lexington. Seward would answer on a one yard rushing touchdown by Sukup. The Minutemen would end the game on a high note with a five yard rushing touchdown by Carpenter.

Seward was led by Myers who tossed for 122 yards, three total touchdowns and one interception. Novacek led the rushing attack with 93 yards. Sagehorn had three catches for 46 yards.

Lexington plays at Waverly next Friday while Seward hosts Bennington.