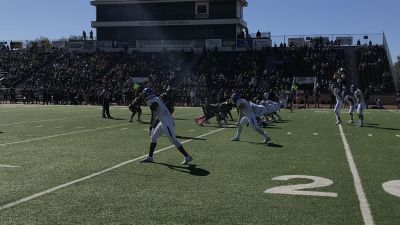 The Tigers (6-2), two-time defending MIAA Champions, win a sixth straight game and beats the Lopers (5-3) for an eighth consecutive year. Hays also improves to 12-4 in games decided by seven points or less the last three falls.

“We’re right there with any team in this conference,” UNK head coach Josh Lynn said. “The story of today was big plays. I thought we answered the bell in certain areas in the second half. Our offense got going but once again it was the big plays and we have to eliminate those.”

Using a quick strike passing attack Hays scored on its first four possessions to lead 23-7 midway through the second quarter. UNK ended the half with a score and then tallied another touchdown to start the second half to get within six. The Loper defense also started the third quarter strong by forcing back-to-back Tiger punts.

“We executed better in the second half. We couldn’t get out of our own way in the first quarter,” Lynn said. “We had a first down holding penalty on a 50-yard run and just couldn’t get going.”

Finishing 9 of 14 on third down, the first big conversion for Hays came late in the third quarter when UNK had the momentum and was poised to get the ball back in good field position. On third and one from its own 12-yard line Fuller tossed an 88-yard scoring strike to sophomore receiver Manny Ramsey. On the play the 5-11 Ramsey faked the slant and went deep.

The Lopers answered the bell, going 82 yards in six plays. Redshirt freshman quarterback TJ Davis (Colorado Springs) called his own number from four yards out on a drive that lasted just 2:14.

However, Hays did it again, converting on 3rd & 4 from its own 34-yard line and then 3rd & 23 from the Loper 47-yard line. On the latter Fuller connected with senior receiver Layne Bieberle for an over-the-shoulder 38-yard gain that was ruled inbounds along the UNK sidelines. Four plays and another third down conversion later it was a 37-24 Tiger lead.

UNK didn’t go quietly into the fall afternoon as they marched 75 yards in 11 plays. Senior back Darrius Webb (Allentown, Pa.) capped things with a one-yard plunge on third and goal with 4:05 left. The Lopers ended the day by going 4 of 10 on third down.

With two timeouts left Kearney decided to kick it long and the defense once again got to third down. This time Fuller completed a 10-yard pass to Ramsey on 3rd & 9 from the Tiger 30-yard line. The catch and a generous spot came along the sidelines. To rub salt in the wound Fuller hooked up with senior receiver Harley Hazlett for a 10-yard gain on 3rd & 6 and with just over a minute remaining.

“We were better defensively in the second half but let them out of jail on that third and forever play. Kid makes an incredible catch … give him credit. But that’s a play we need to get a stop and get off the field,” Lynn said. “We’re extremely proud of our players and we’re not done yet. We’re excited about the next three games.”

​Fuller completed 19 of his first 24 passes and ended up 28 of 38 with TD tosses of nine, 15 and 88 yards and no interceptions. Sacked twice, he completed passes to seven different teammates led by Hazlett (nine recep., 81 yds.), Bieberle (seven recep., 127 yds.) and Ramsey (six recep., 169 yds.). UNK bottled up the Tiger ground game which tallied just 79 yards on 32 attempts. However, 5-9 senior back Charles Tigner had scoring runs of two and 17 yards.

Next, Webb tallied 88 yards and two TD’s on 12 carries with six different Lopers having a reception. That includes sophomore tight end Zach Blaschko (Kearney) who caught a 17-yard TD toss from Davis on 4th & 4 in the first quarter. On the play he went up high to get the ball before being hit hard by a couple of Tigers.

Defensively senior safety LaRoy James (Opa-locka, Fla.) had a game-high 16 tackles, five of the solo variety, and a forced fumble. Fellow safety Blake Bubak (Columbus) had nine stops with three others at seven apiece. That included Maryland senior end Hinwa Allieu who had one of UNK’s two sacks.