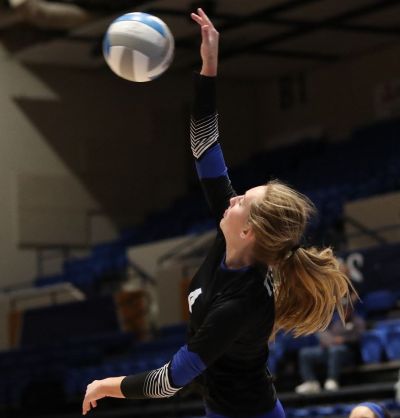 Kearney, Neb. – Freshman outside hitter Kamryn Schuler had 13 kills and junior right side Mary Katherine Wolfe recorded seven blocks to help second-ranked Nebraska-Kearney sweep Emporia State (-18, -13, -20) Tuesday night at the Health & Sports Center. The Lopers (21-0, 12-0) take the season series from the Hornets (5-15, 1-11) and now has the eighth longest win streak in program history. The match featured only five ties and two lead changes as UNK out hit E-State by well over 130 points. The Lopers also had 10 team blocks, the second time this fall it’s reached double digits in stuffs. “In a weird way these matches are difficult to play. You feel like you’re better than your opponent, you’re having a better year than they are but they still have some things that can create trouble for you,” UNK head coach Rick Squiers said. “You would like to get different players into the match but volleyball is really crazy how fast things can turn around with one little change or two. We got to experience that down the stretch.”

Emporia put up a fight early in the first set and late in third thanks to a 9-0 run. UNK used an 8-5 spurt to open up some breathing room, 19-15, in the opening set with a kill by Schuler (Gretna) making it a four-point Loper lead. That was Kearney’s best offensive set of the night, coming in at .341 (17-3-44). Schuler and junior middle Anna Squiers (Kearney Catholic) led the charge with four kills apiece. The Lopers held ESU to a .023 (8-7-43) effort in set two thanks to six team blocks. Wolfe (Omaha Marian) had four block assists with middles Michaela Bartels (Bennington) and Mackenzie Puckett (Grand Island) at two apiece. Offensively Schuler kept up her torrid pace with three kills and no errors in eight swings. “Here’s the thing we like about Kamryn. She kind of had one of those rough starts freshman sometimes have … it’s a shock to them how fast it is, how good the players are on the other side of the net. For about a month there she had to fight her way up through the practice ranks and she decided to go ahead and do that,” Squiers said. “She’s been really developing in practice and hitting the ball much harder than she was at the beginning of the year.” UNK seemingly held a comfortable 23-11 lead in the third set before allowing nine consecutive Hornet points. Emporia had two blocks, three kills and took advantage of four unforced Loper attack errors during this stretch. Back-to-back kills by Bartels and Schuler ended what would’ve been a miracle comeback. Schuler finished up hitting .520 (13-0-25) and has now had 65 swings without committing an error or being blocked. On the season she’s averaging 1.49 kills per set with a .349 efficiency. Next, eight others Lopers had a kill in the match including six by Wolfe and seven by Bartels. Finally sophomore libero Lindsay Nottlemann (Lincoln Pius X) and junior defensive specialist Monique Schafer (Stuart) both dug up 11 balls. UNK heads to Central Oklahoma and Newman this weekend.