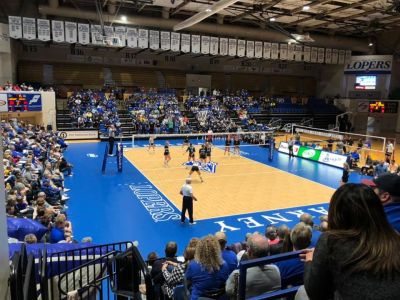 “For a three set match that was a real grinder. You look down and they dug 91 balls and we got to 90 … that’s ridiculous. So it was hard to get a kill but we were able to show enough patience to take three or four swings it sometimes took to get one,” Squiers said. “Like the Northwest Missouri match, we thought we better hit over .200 to have a chance and we barely did that (.205).”

The Lopers controlled the first set and half, recording 16 kills to take the opening stanza by eight and then jumping out to leads of 10-5, 16-11 and 19-12 in the second set. That’s when Washburn began to step up, using a 10-3 run to tie things at 22. This stretch featured seven WU kills, a block and two unforced Loper attack errors.

Kearney, however, regrouped and closed on a 3-1 run with a kill from Omaha junior right side MK Wolfe giving the Lopers a 2-0 lead in the match. Both teams had 15 kills in the set but UNK hit 30 points higher.

“The match down there was similar as we held them to under a .150 percentage (.096 tonight). Our defense was fantastic and I thought we did a good enough of a job from the service line that we could take away and option or two,” Squiers said. “In the rotations where maybe they weren’t as strong we just kept it in the court and let our defense do it’s a thing.”

The third set was the tightest, featuring eight ties and five lead changes. Three straight blocks, all involving Kearney junior middle Anna Squiers, made it 12-9 and UNK wouldn’t trail again. Down the stretch the Lopers turned to Mauch (North Platte) who scored the last five points via kill. The redshirt freshman, who missed 2018 due to injury, had a season-high 15 kills on 39 swings while hitting a team-high .333.

“Our assistant coach Steph Brand kept telling me all off-season that mid-October, late October Sami is going to be a difference maker. I don’t think she’s physical 100 percent which is exciting to think about. She’s going to get a couple of more inches on her vertical as she plays more and more,” Squiers said. “Sami has a great arm and she knows how to use it and gives us a dimension we didn’t have early in the season.”

Fall Sports up in the air for UNK