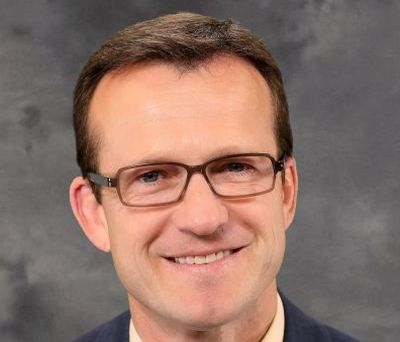 KEARNEY – University of Nebraska at Kearney Chancellor Douglas Kristensen announced today( Tuesday) the Marc Bauer has been named the new Director Of Athletics at UNK. Bauer has been the interim Athletic Director for the past year. Bauer has overseen 14 sports with approximately 450 student-athletes and 40 coaches and staff members. As interim athletic director, Bauer developed an internal structure to manage scholarship and operating budgets, launched the Loper Ath LEADS program to promote student-athlete leadership in the community and implemented a performance-based coaching evaluation process. Chancellor Kristensen had this to say about the hire.   “Marc brings tremendous passion for athletics, coaching and a positive student athlete experience. He also brings an understanding of the importance of building a quality culture for competitive athletics and academic success. It is a culture that supports students from recruitment through a successful college experience to graduation, helps them develop skills that will be valuable throughout their lives, and embraces strong ethics and compliance expectations.

Further, Marc’s successful career as an educator and as a national championship coach serve as a strong background for recruiting, assisting and retaining successful coaches. His energy and strong relational skills will also serve him well in supporting student-athletes, coaches, and staff as well as expanding relationships with fans, donors and our academic community. Throughout his career he has been a tireless advocate for UNK and an outstanding ambassador for Loper Athletics, UNK and Kearney. I look forward to working with him as our Athletic Director.”

A three-time Division II All-American at the University of Nebraska at Omaha and National Wrestling Coaches Association Division II Hall of Fame coach, Bauer led the UNK wrestling program from 2000 to 2016, winning three national championships and finishing as the national runner-up five times. The Lopers also won two national dual titles during his coaching tenure and 15 conference and regional championships. Bauer, who was named NCAA Division II Coach of the Year in 2003 and 2008, directed efforts to generate more than $3 million through fundraising and donations for the UNK wrestling program while strengthening community relations. The former Kearney Public Schools teacher served as an assistant professor in UNK’s Kinesiology and Sport Sciences Department from 2016 to 2018. He’s a member of the National Wrestling Coaches Association, National Association of Collegiate Directors of Athletics and Nebraska State Educators Association.