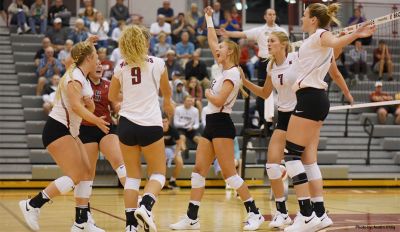 Hastings, NE – The electricity of Lynn Farrell Arena was just what you would want for the first game of the season.  With a match that was up and down like a rollercoaster, the Hastings Lady Broncos Volleyball team dropped their home opener to No. 19 Corban 22-25, 19-25, 25-18, 25-22, 13-15 on Wednesday.

After a very competitive back and forth first set, the Lady Broncos were never able to get ahead of the Warriors, as Corban was able to keep the lead majority of the set and finish with 25-22 win.

Lady Broncos continued to struggled in the second set against the Warriors, even being down 11 at one point. With help from veterans Lucy Skoch (JR/Hastings, NE), and Cassidy Ostrand (SR/Central City, NE), the Lady Broncos were able to help close the gap before eventually dropping set two 19-25 before going into intermission.

Coming out of intermission, down two sets to none, the Lady Broncos came out firing. The Warriors were able to keep it close in the beginning of the set. But without ever falling behind in the set, the Lady Broncos kept their foot on the gas and was able to get the set three win and avoided getting swept.

With the final set underway, the Lady Broncos were able to stay hot leading 10-6 before Corban was able to go on a 4-0 run and tie it up. From there on out it was back and forth till the very end where the Warriors were able to come out on top and win the final set and series with a 15-13 victory.

The Lady Broncos were led offensively by Emily Krolikowski (SO/Cairo, NE) who had 13 kills as well as a hitting percentage of .571. Skoch and Emily Lenners (SR/Adams, NE) both helped out offensively and defensively with Skoch lead the team in kills with 14 and had 10 blocks and Lenners with 12 kills and team high of 11 blocks. Claira Thede (JR/St. Paul, NE) and Jaisee Stinson (FR/Omaha, NE) took charge in assists with 27 and 19, respectively. Bailey Lukasiewicz (SO/Farwell, NE) also led the team with 22 digs.

The Lady Broncos will be back in action this Friday and Saturday, where they will be participating in the Bill Marshall Classic. The Lady Broncos first game will be against No. 22 Bellevue University, followed by two matches on Saturday against No. 3 Grandview University and No. 10 Eastern Oregon University.

First serve on Friday will be at 7:00 pm CST at Lynn Farrell Arena.