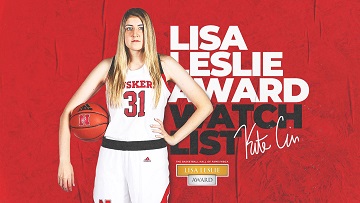 Lincoln – Nebraska’s Kate Cain was named to the Lisa Leslie Award Watch List for the third consecutive year, when the candidates for the national center-of-the-year honor were announced by the Naismith Memorial Basketball Hall of Fame and the Women’s Basketball Coaches Association on Friday, Nov. 13.

Cain, a 6-5 center from Middletown, N.Y., will enter her fourth season at Nebraska as a graduate student with a streak of 91 consecutive starts. As a junior, Cain earned her second appearance on the Big Ten All-Defensive Team by notching a school-record 101 blocked shots while ranking third in the NCAA in blocks per game. She added 9.3 points and 7.2 rebounds while shooting 53.9 percent from the field and 68.3 percent from the free throw line on her way to earning honorable-mention All-Big Ten accolades. Cain led the Big Ten in both blocks (3.6 bpg) and defensive rebounds (6.7 drpg) while moving into the top on the Big Ten’s all-time top-10 list.

Nebraska’s career blocked shot record holder with 280 over her first three seasons, Cain claimed her first spot on the Big Ten All-Defensive Team as a freshman in 2017-18 when she posted a then-school record with 100 blocks while averaging 9.9 points and 7.0 rebounds to help the Huskers to the 2018 NCAA Tournament. She also was a member of the Big Ten All-Freshman Team after being named the Big Ten Freshman of the Week on four occasions. Along the way, she produced the first points-rebounds-blocks triple-double in Husker history with 22 points, 14 rebounds and 11 blocked shots in a win over Florida Atlantic (Dec. 19, 2017).

Cain, who earned mention on the Lisa Leslie Award Watch List prior to the 2018-19 and 2019-20 seasons, was recently projected as a middle second-round pick in the 2021 WNBA Draft. A CoSIDA Academic All-America candidate, Cain is a two-time Big Ten Distinguished Scholar and Academic All-Big Ten choice who earned her bachelor’s degree as a management major in May of 2020, just three years into her Nebraska career.

College basketball fans are encouraged to participate in Fan Voting presented by Dell Technologies in each of the three rounds. In early February, the watch list of 20 players for the 2021 Lisa Leslie Award will be narrowed to just 10. In early March, five finalists will be presented to Lisa Leslie and the Hall of Fame’s selection committee. For more information on the 2021 Lisa Leslie Award and the latest updates, log onto www.hoophallawards.com and follow @hoophall and #LeslieAward on Twitter and Instagram. Starting Five Fan Voting presented by Dell Technologies goes live today, November 13.