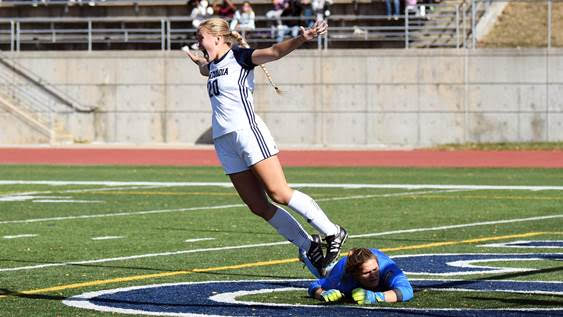 SEWARD, Neb. – This may have been the most thoroughly the Concordia University Women’s Soccer program has ever dominated possession against the perennially powerful Hastings program. At last, the Bulldogs got the only goal they needed via Sydney Ross in the ­83rd minute while extending their run of dramatic victories. Concordia defeated Hastings, 1-0, in a renewal of an intense rivalry on Saturday (Oct. 17).

Head Coach Thomas Goines’ squad has now won three-straight GPAC outings, all by one-goal margins. The Bulldogs have improved to 6-3 overall and to 6-2 in league play.

“The girls have kind of had this one circled on the calendar,” Goines said. “This was a game of importance having it be senior day but also a rivalry match on top of that. I think it added a whole level of new intensity in a game like that. It was a challenging match from beginning to end.”

Prior to kickoff, Concordia celebrated its nine seniors. That group includes two-time first team All-GPAC performer Tori Cera, who had missed the season’s first eight games. She returned to the starting lineup on Saturday and provided a noticeable jolt of energy to a team that already appeared to be beginning to hit its stride. Impressively, the Bulldogs held the Broncos to a single shot the entire 90 minutes.

An important sequence occurred late in the first half when a collision outside the 18-yard box resulted in the Hastings starting keeper being sent off. The Broncos (5-2, 3-2 GPAC) then proceeded down a player for the last 53 minutes. Other than failing to punch in a goal earlier, Concordia took advantage. The Bulldogs put eight shots on frame.

The one that counted the most was delivered by Ross, whose hustle made the difference. After Mikeila Martinez’s strike hit the crossbar, Ross chased down the rebound and calmly beat the keeper by slotting the ball to her left. Neither team managed a shot the rest of the way and the Bulldogs celebrated their first win over Hastings since the 2017 regular season.

Seniors like Michaela Twito haven’t forgotten some of the past battles with the Broncos that resulted in agonizing defeats. Said Twito, “I’m proud of our team and proud of our hard work. Freshman to senior, it was just unreal … we got Tori Cera back, literally the best player in the GPAC. I feel like sky’s the limit right now.”

Cera and fellow senior Chelsea Bright both started the game while making their first appearances of 2020. On this particular day, a lot of contributions were made up and down the roster. Goalkeeper Lindsey Carley really didn’t face much of a threat while picking up the 21st shutout of her career.

“Our theme through the last few weeks is trying to own a style of play that is selfish with the ball,” Goines said. “We want to have it and if we have it, they can’t score. It’s a mentality. Creating opportunities off of that is starting to develop. I was very happy with their growth. They’ve continued to find ways to dominate the ball in different parts of games.”