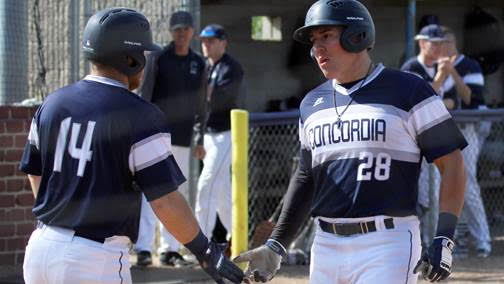 SABETHA, Kan. – A weekend in Sabetha, Kan., proved to be a fruitful one for the 24th-ranked (according to Perfect Game) Concordia University baseball team. The Bulldogs completed a four-game sweep of Waldorf University (Iowa) on Sunday by taking 10-4 and 5-4 decisions. The latter contest produced by far the most drama with Concordia winning in walk-off fashion.

Sixth-year head coach Ryan Dupic’s squad has won five-straight games to move to 8-2 overall this season. Concordia outscored the Warriors by a combined total of 35-8 over the four-game series.

“Defensively we performed well,” Dupic said. “We didn’t make any errors this weekend, which was a big positive. Our pitchers also struck a lot of guys out. We have a staff with some swing-and-miss potential so we can be hard to score on at times.

“We didn’t swing the bat quite as well as yesterday, but we got some nice contributions from our bench and our bullpen. Noah Janssen had a big hit in the second game and Lukas Diehm and Zach Pinkerton did a nice job. We’re continuing to learn more about our team.”

The Bulldogs were the home team on the scoreboard on Sunday. They trailed 4-2 entering the bottom of the seventh of game two. In that frame, Concordia got a leadoff hit and then took three hit-by-pitches in a row to force in a run. The tying and winning runs came around to score on an errant throw to the plate to send the Bulldogs home with a perfect weekend.

Slugging sophomore Jesse Garcia belted one run in each of the first three games of the series. He also recorded two hits, including a double, in the finale on Sunday. In addition, Keaton Candor homered in Sunday’s opener. On the mound, Diehm covered 4.1 innings of game one and allowed just one run on three hits and a walk to go along with nine strikeouts. In game two, Pinkerton picked up the win and did not give up a hit or run over three frames (two strikeouts).

Dupic needed only two pitchers on Saturday when Jason Munsch threw a one-hitter that featured 14 strikeouts and Nick Little dealt a no-hitter that included 10 punch outs. Six Bulldog hurlers toed the rubber on Sunday. The starters were Jake Fosgett and Adrian Cotton.

Before Concordia’s spring trip to Tucson, Ariz., the team will be at Baker University in Baldwin City, Kan., for a doubleheader on Tuesday. First pitch is set for 2 p.m. CT. The Wildcats sport an overall record of 5-12.