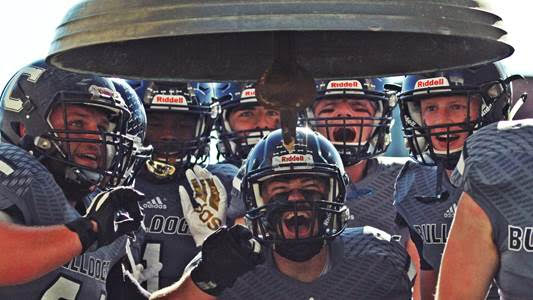 The hope is for this to be the season in which things come together for a Concordia University Football program that turned over a large portion of its roster in years two and three of Patrick Daberkow’s tenure as head coach (now in year four) of his alma mater. The Bulldogs were plagued last fall by an inability to run the football (1.8 yards per rush) and dropped four games by one-score margins, including a four-overtime slog in the mud at Jamestown. The program is not all that far removed from a solid three-year stretch from 2015 through 2017 during which it went a combined 19-11 and posted one NAIA top 20 finish.

The margin between a three-win season (as Concordia experienced in 2018 and 2019) and a seven-win campaign or better can be razor thin. One thing is for certain – the Bulldogs have to be more productive on offense. They improved only modestly in 2019 while averaging 15.6 points per game compared to 15.4 the previous season. The Bulldogs still find ways to stay in most games with their typically rugged and physical defense. All-American linebacker Lane Napier returns to finish off a career that will put him among the all-time great defensive players in program history.

Starting with the positives, Concordia boasts one of the deepest and most talented groups of receivers it has had in quite some time. Now a junior, receiver Cayden Beran broke out last season while catching 49 passes for 701 yards. Four different Bulldog receivers recorded at least one 100-yard outing last season for a passing attack that was explosive at times. Beran is joined at the position by the likes of veteran pass catchers in seniors Art Anderson and Lane Castaneda and junior Korrell Koehlmoos (37 receptions for 490 yards). Daberkow also believes strongly in the next young receivers in line.

The winner of the quarterback derby will certainly have a nice set of weapons at his disposal. Last season’s primary signal caller Jake Kemp has landed at Fort Hays State University as a graduate assistant coach. In other words, the position is up for grabs once again. Sophomore Wyatt Ehlers is the frontrunner from an experience standpoint. He possesses the ability to hurt the opposition with his arm and legs and owns a winning pedigree as a former state championship quarterback at Centennial High School. Quarterbacks Blake Culbert and Luke Lang have also been in the program for multiple years.

The running back spot is now a question mark with former all-conference back Ryan Durdon having moved on. Even Durdon struggled to find room to roam last season. The running game hasn’t clicked since 2017 when Concordia employed a more veteran offensive line. Improvement will be expected from a unit that returns three starters in guard Cole Baumgartner, tackle Gavin Mull and center Johnny Robinson. Keegan Hornung, a redshirt last season, also has starting experience up front. They may end up blocking for the likes of backs Jonah Weyand and Devin Zeigler. Says Daberkow, “The run game has to improve. That’s non-negotiable.”

At tight end, Garrett Schardt has reeled in 15 receptions for 254 yards in his two collegiate seasons. Loaded with potential, Brady Fitzke says he’s as healthy as he’s been in some time. Daberkow also believes York High School product Wyatt Cast has a bright future.

Should the Bulldogs find a steadying influence at quarterback, it may begin to form the identity it has sought over the past couple seasons. Concordia had to abandon the run at times in 2019 and averaged only 4.1 yards per play as an offense. If the Bulldogs can creep that number up above 5.0 this fall they will have a chance to improve their win total significantly. Offensive Coordinator Reggie Corbin will be tasked with finding ways to get the ball into the hands of the team’s playmaking receivers.

Behind its relentless linebacker crew, the Concordia defense made significant strides in slashing its yards per play allowed from 6.1 in 2018 to 4.6 in 2019. In their 3-4 alignment, the Bulldogs almost always have a competitive defensive unit. Over the past decade, Concordia has been, on average, a top 25 team nationally in terms of scoring defense. Defensive Coordinator Corby Osten will have to replace three of four starting linebackers and all-conference defensive end Aaron Rudloff, but he will expect there to be no drop off.

At inside linebacker, Napier has been one of the most productive players in the nation over the past few years. The three-time first team All-GPAC performer has racked up 347 tackles, including 31 for loss, in his career as a Bulldog. He will have some new faces alongside him with 2019 seniors Riley Bilstein, Derek Tachovsky and Zac Walter having departed. Fall camp will likely determine who gets the nod next to Napier. Caydren Cox, Shayne Campbell and Payton Kidder will have chances to step in while Lincoln Lutheran alum Logan Kreizel makes the switch to linebacker from tight end.

The starting safety duo of sophomore AJ Jenkins and senior Peyton Mitchell is back in the fold while Concordia will have to replace corners OJ Ferguson and Johnny Johnson. Mitchell picked off five passes and broke up eight more as a 6-foot-1 ball-hawk last season. Jenkins collected three picks of his own as a freshman starter. Collectively, the backfield did a solid job last season in limiting opposing passers to a 52.7 completion percentage and a touchdown-to-interception ratio of 15-to-14. More help is on the way. Daberkow says that he’s “really excited about the incoming talent” at defensive back.

The graduation of Rudloff will certainly be felt up front. He generated nine sacks in a strong senior season. Despite that loss, there are plenty of rotational players who return, such as nose guards Gerald Morris and Gary Nieuwkoop and defensive ends Chase Hammons and Payton Stevens. Outside of Rudloff, many of the team’s sacks in 2019 were produced by its linebackers (13 sacks between the starters). More than anything else, the defensive line will be counted upon to hold up against the run. Daberkow has been especially impressed with the offseason work of Morris.

Just like in the past, expect this side of the ball to give the Bulldogs a shot in every game (despite having only five returning starters). Last season Concordia held three opponents below 200 total yards and not a single foe broke 500 yards of offense. Last season’s squad also enjoyed a large advantage in ball security with eight fumbles (seven lost) compared to 21 fumbles (13 lost) by the opposition.

Concordia returns its kicker-punter duo in sophomore Jordan Spilinek and senior Lane Castaneda. Spilinek went 8-for-18 on field goals, but he showed the potential for growth. He converted 17-of-18 extra point tries. Daberkow says Spilinek will be pushed in camp. Castaneda has become a solid punter. He pinned the opposition inside its own 20 on 16 of his 64 punts last season. The Bulldogs did not show a lot of explosiveness in its return game in 2019, but it was solid in coverage (opponent averages of 21.0 yards on kickoff returns and 6.5 yards on punt returns).

How far the offense progresses will likely go a long ways towards deciding whether the record trends positively after back-to-back 3-7 seasons. Says Daberkow, “The standard has been set for our defense. That unit has embraced what it is called to do. We expect the offense to rise to that standard.” With the nonconference road trip to Mayville State canceled, Concordia will open up the campaign against rival Doane for the second-straight year. Had the Bulldogs been on the right side of a close game with Doane in 2019, the season may have turned out differently. Concordia wasn’t far off from being 6-0 (but instead was 3-3 with three tight defeats). The opener will set the tone for the Bulldogs as they embark upon a nine-game, GPAC exclusive regular season. One thing is for certain, things will look different in the COVID-19 era of college football.