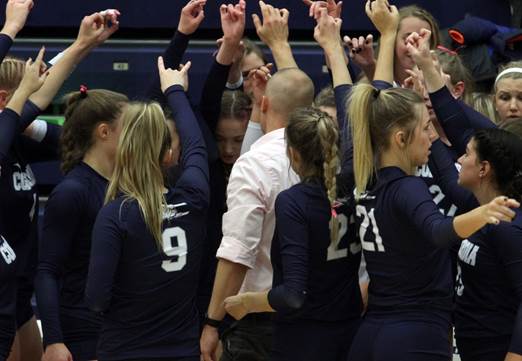 SEWARD, Neb. – For the second time in five seasons, the Concordia University volleyball program is headed to the NAIA Volleyball National Championship tournament. For the first time ever, the Bulldogs are bound for the final site, Sioux City, Iowa, for pool play action on the national stage. The announcement came from the NAIA on Monday (Nov. 18). With much of the team gathered in the Walz Conference Room, cheers rang out when Concordia was unveiled as the 15th-ranked team in the NAIA.

The program also qualified for the opening round of the national tournament in 2015. Pegged eighth in the GPAC’s preseason poll, the 2019 team has outperformed all outside expectations and has been rewarded for it.

“It’s a reward for all the hard that they’ve put in throughout the entire year,” said head coach Ben Boldt. “I’m glad that they have the opportunity to experience this. In the moment right now, it feels like we are just getting ready for the next challenge. To look back and reflect on it a little bit, it’s awesome to see that their hard work is paying off.”

The Bulldogs made the tournament fairly comfortably, earning the third at-large bid behind No. 9 Columbia (Mo.) and No. 14 Corban (Ore.). Based upon the NAIA’s final regular-season poll, Concordia (23-6) recorded four victories over top 25 foes: No. 14 Corban, No. 20 College of Saint Mary (twice) and No. 25 Midland. A perennially strong team within the GPAC, Midland was the last team out of the field. The final at-large berth went to No. 23 Bellevue.

The national qualifying field includes 44 teams, including 36 automatic qualifiers and one host berth (Morningside), in addition to the seven at-large selections. The top 19 teams in the final poll, plus Morningside, advance straight to pool play at the Tyson Events Center in Sioux City, Iowa. Pool play will take place Dec. 3-5. The other 24 qualifiers will be in action in the opening round this Saturday. Once the opening rounds are finished, the 32 remaining squads will be broken down into eight four-team pools. The top two teams in each pool will move on to play in a 16-team bracket.

The career of seniors like Emmie Noyd has been extended for at least three more matches. However, as Boldt talked about after Monday’s announcement, the Bulldogs are setting their sights on an extended stay in Sioux City.

“It’s a dream come true, honestly,” Noyd said. “I think any college athlete wants to get to nationals. For it to be my senior season and to end it that way is a great experience. I think we’re all just so thankful to have a chance at a national championship. It’s really exciting.”

Concordia’s qualification for nationals in 2015 occurred at the time when the NAIA had a 36-team (only 12 teams went straight to the final site) format that featured eight at-large selections. The Bulldogs were the No. 7 at-large team that year. They hosted an opening round matchup with Olivet Nazarene and fell in straight sets. Thus, this 2019 squad will also have a chance to be the program’s first to ever win a match in national tournament play.

According to the NAIA, final site pools will be determined by 5 p.m. CT on Sunday (Nov. 24). For more details on the 2019 NAIA Women’s Volleyball National Championship, visit the NAIA volleyball website HERE.