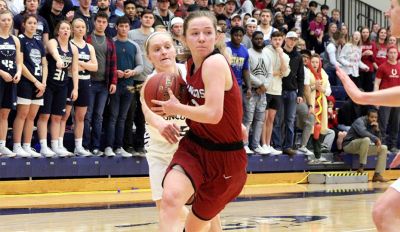 Seward, NE – The Hasting College women’s basketball team was back in action on Wednesday evening as they suffered their first loss of the season on the road to No. 3 Concordia 53-46.

The Lady Broncos struggled to limited the Bulldogs shooting as they were able to shoot 46.3 percent on the night while forcing 24 turnovers, 18 coming from steals. Hastings struggled to shoot the ball in the first half, as they came out shooting just 21.4 percent in the first half. Coming into this game, both teams knew it wasn’t going to be an easy victory and it wasn’t.

Both teams to start the game battled back and forth with each other until Concordia was able to put together an 9-0 run to give themselves a 15-5 lead in the first. A couple late basket by the Lady Broncos would cut into the Bulldog as they still trailed 17-10 at the end of the first

Concordia would the start the second quarter on a 7-0 run to give themselves a 24-10 lead in the early parts of the second quarter. Kaitlyn Schmit (JR/Omaha, NE) was able to capitalize on a Concordia turnover to cut the lead to 10 with 3:58 left before halftime. With just four second till half, Emma Grenfell (SR/York, NE) was able to force a steal and would be fouled as she drove to the basket. She would go 1-for-2 at the charity stripe as the Lady Broncos would go into half trailing 32-20.

As both teams returned to the court after half, the Lady Broncos were able to score first as Schmit would drain a three pointer after grabbing the offensive rebound. With 2:56 left in the third, Dawson Knode (FR/Haxtun, CO) would make a pair of free throws to cut the Bulldogs lead to just five as Hastings still trailed 35-30. Taylor Beacom (SO/Papillion, NE) would find Shandra Farmer (SR/Hastings, NE) after a steal as she would drive to the paint for the easy score. Concordia would get the final basket of the quarter as the teams would head into the final quarter with the Lady Broncos still trailing 40-32.

As the fourth quarter got under way Schmit would make a pair of free throws to bring the lead under double-digits. After a pair of made free throws from Gabby Grasso (SR/Omaha, NE), Knode would force a steal and find Farmer as she would drive into the paint and score to make it a 44-38 game. With 5:16 to go, Knode would knock down a three-pointer to make it a five-point game. The Lady Broncos would keep fighting but would be unable to catch back up to the Bulldogs as they would suffer their first loss of the season falling 53-46.

Grenfell would lead Hastings on the day, as she went 2-for-8 for 12 points and picked up six steals on the night. Schmit would finish the day with nine points on 3-for-14 shooting and four rebounds of her own. Knode scored seven points on 2-for-7 shooting and adding four rebounds as well. Farmer and Grasso would both finish with six points as Farmer shot 2-for-9 and Grasso went 2-for-5 and would lead the team with nine rebounds.

Both teams would finish with 37 rebounds each.