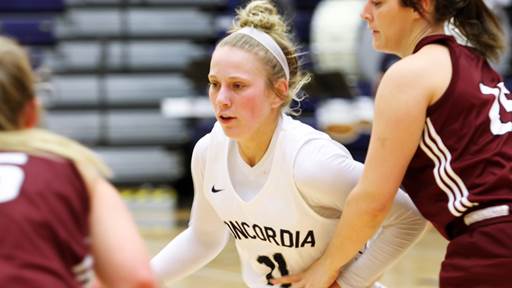 CRETE, Neb. – While feasting on turnovers, the third-ranked Concordia University women’s basketball team raced out to a 24-1 lead as part of a comfortable evening inside the Haddix Center in Crete, Neb. Host Doane provided little resistance in a game that it saw it go the first seven-and-a-half minutes without a basket. The Bulldogs steamrolled their way to a 102-47 victory as they remain in hot pursuit of another GPAC title.

Fourteenth-year head coach Drew Olson’s squad did not get caught looking ahead with a trip to No. 9 Dordt and a home game versus No. 2 Hastings on the horizon. Concordia (23-2, 16-1 GPAC) remains a game out of first place with five contests left in the regular season.

“We had a really good, mature approach to tonight,” Olson said. “It really showed that we came in focused and played well early to build a big lead. It’s a good sign of where our maturity is at.”

Considering the Bulldogs rocked the Tigers, 110-47, on Dec. 4, Wednesday’s outcome wasn’t unexpected. Concordia won its eighth-straight series meeting over Doane by dominating all facets. While forcing 40 turnovers, the Bulldogs reached the 100-point mark for the 11th time this season. It was clear early on, this was just a matter of how lopsided the final score would end up.

Also a national qualifier in track and field, Cornell’s athleticism was on full display in Crete. Said Olson, “Today was a good example of what she’s capable of. She gave great effort defensively and on the boards and when she gets in transition, she’s just so much more athletic than most people. She was able to get a lot of easy buckets that way.”

It was a mostly miserable evening for Doane (2-20, 1-16 GPAC), which barely had more points than turnovers. Haylee Heits served as its only reliable source of offense. She totaled 19 points and eight rebounds while netting 8-of-9 free throw tries. The foul line was about the only area of advantage for the Tigers, who shot 31.0 percent for the night.

Not a single Bulldog logged more than 18 minutes as Olson divvied out the playing time. The reserves combined for 53 points. In addition to Cornell’s fine night off the bench, Taryn Schuette added nine points (3-for-3 from beyond the arc), five steals and four assists. Concordia shot 51.9 percent (42-for-81) from the floor and limited its turnover count to 14. The Bulldogs outrebounded Doane, 40-32. The largest lead of the game stood at 58 points early in the fourth quarter.

The three-game road swing will conclude on Saturday in Sioux Center, Iowa, where Concordia and Dordt (20-5, 12-5 GPAC) will tip off at 2 p.m. CT. In this season’s first meeting, inside Walz Arena, the Bulldogs earned a 69-55 win (Jan. 4). The only team to knock off the Defenders on their home court this season was Morningside. 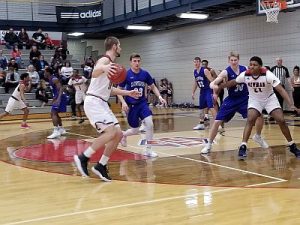