Milwaukee, Wis. — Knotted at 50-50 in the closing seconds, the Creighton women’s basketball team delivered an excellent defensive effort but Marquette’s final shot fell through the net with 0.7 seconds left to second the Bluejays to a 52-50 defeat.

Creighton fell to 14-8 on the season after the loss and 6-5 in BIG EAST play, while Marquette moved to 17-5 overall and 8-3 in conference.

The Bluejays opened the game as perfectly as any Creighton fan could want, scoring the first nine points of the contest to lead 9-0 with 6:13 left in the first. Senior Jaylyn Agnew and sophomore Payton Brotzki each returned to the lineup, contributing an early three-pointer (Agnew) and the final trey of the opening quarter (Brotzki) as the Bluejays took a 14-6 lead into the second.

Creighton extended its lead to as much as 13 early in the second on three free throws from junior Temi Carda to hold a 19-6 advantage (9:01). Marquette responded with an 8-0 run of its own to make it a 19-14 game (5:58). The Bluejay offense responded quickly via trey from junior Tatum Rembao and Carda as Creighton went on to take a 32-19 lead into halftime.

Just as the Bluejays overcame a huge deficit on Friday at #11 DePaul, Marquette rallied with an impressive third quarter and take the lead at 35-34 (3:01), eventually sending the game to the final frame with Creighton down 38-36.

The fourth quarter saw Marquette push its lead to four points, three different times, but in each instance Creighton was able to rally behind Carda. The Minnesota native delivered eight of her game-high 20 points in the final ten minutes, including a trey with 3:28 remaining to make it a one-point game at 46-45. Moments later a pair of Creighton free throws from senior Olivia Elger put Creighton back on top, but Marquette reserve Claire Kaifes knocked down a three-ball from the top of the key to put Marquette back up 48-46 (2:13).

As the battle moved into the final minute, Creighton held possession down 50-48. Carda drove to the bucket, but her shot was offline. Saunders battled for the rebound, then delivered the put back to tie the game once more at 50-50 with 20 seconds remaining.

On the Golden Eagles final possession Creighton forced Marquette head coach Megan Duffy to use a timeout with 12 seconds left, then Lauren Van Kleunen connected on a turn around hook shot from eight feet with 0.7 seconds left on the clock.

Creighton used its final timeout, but the lob to Agnew was knocked away to deny Creighton the Midwest sweep.

Carda’s 20 points led all scorers, while Marquette got 15 from Selena Lott, 11 from Jordan King and 10 from Van Kleunen.

The Bluejays return to the floor on Saturday, Feb. 8th as Creighton travels to Providence, Rhode Island for an early tip with the Friars. The game is scheduled to begin at 11:00 am (CT). 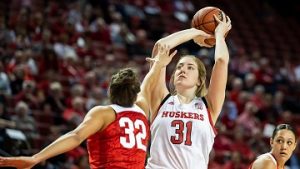