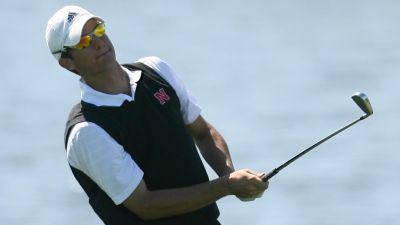 Former Nebraska golfer Brandon Crick has put himself in position to potentially qualify for the 2019-20 PGA Tour, after a pair of strong finishes recently on the Korn Ferry Tour. Crick, who earned an NCAA Regional appearance as a Husker senior in 2010, recorded two straight top-15 finishes by taking second at the Ellie Mae Classic (Aug. 4) and tying for 15th at the Portland Open (Aug. 11). With the strong play, Crick vaulted from 155th to 54th in the tour standings giving him a chance to compete in the tour finals. The top 75 golfers in the point standings advance to the finals. If Crick finishes in the top-25 in the point standings after the next three events in the finals, he will earn a PGA Tour card for the 2019-20 season.

Crick has already secured a full-time spot on the Korn Ferry Tour next season. “I’ve got nothing to lose,” Crick said. “I’ve got a place to play next year, which is awesome, and I feel like my game is at a point where I can really compete and win.” Before the last two regular-season tournaments on the Korn Ferry Tour, Crick had missed five straight cuts. “It was kind of a grind of a season. When I was hitting the ball well, I wasn’t chipping and putting well,” Crick said. “When I was chipping and putting well, I wasn’t hitting the ball well, so it all just kind of came together.” Crick will be in action this weekend at the Nationwide Children’s Hospital Championship at the Scarlet Course in Columbus, Ohio.

He will continue his hunt for a PGA Tour spot in the Albertsons Boise Open at the Hillcrest Country Club in Boise Idaho (Aug. 22-25), before rounding out the three tournament stretch at the Victoria National Golf Course in Newburgh, Ind., for the Korn Ferry Tour Championship. Two other former Huskers made appearances on the Korn Ferry Tour this season, as Scott Gutschewski placed in the top-100 in the point standings and finished with two top-10 finishes, including a tie for ninth at the Pinnacle Bank Championships at The Club at Indian Creek in Omaha. Former Husker Brady Schnell played in three Korn Ferry Tour events and placed in the top-30 in all three events highlighted by his tie for 12th at the Corales Puntacana Resort and Club Championship.