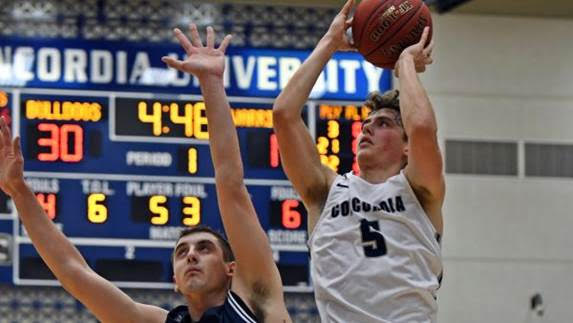 SEWARD, Neb. – The defending GPAC tournament champions want to prove they remain a force to be reckoned with inside the league. The backcourt deployed by the Concordia University Men’s Basketball team can flat out ball, as Midland learned firsthand. All three starting guards scored in double figures in an impressive GPAC opener dominated by the Bulldogs, 82-55, on Tuesday (Nov. 10) night.

The scoring is nice, but Head Coach Ben Limback really wants to see this squad dig in defensively. Concordia managed to hold the Warriors to 32.8 percent shooting.

“I was really proud of our defensive effort,” Limback said. “We had 15 deflections at the half. I felt like our defense was leading to our offense. In the GPAC you’re going to struggle to score at times because they key in on certain guys. To get some easy buckets with your defense is a huge key and I thought we did a good job of that tonight.”

The Bulldogs also blew out Midland at home last season. This time around, Concordia made sure to spread the sugar. Four of the five Bulldog starters notched 10 points or more: Carter Kent (15), Sam Scarpelli (12), Justin Wiersema (12) and Gage Smith (10). Scarpelli put home the first six points of the contest and Concordia never really looked back. By halftime, the Bulldogs were in control with ownership of a 41-25 lead.

Concordia didn’t necessarily shoot the lights out (43.1 percent from the floor), but it played solidly throughout the evening. It turned it over only nine times and went 14-for-16 from the free throw line. Limback was also glad to get Grant Wragge (five rebounds and four assists) back on the floor. Off the bench, Cory Davila and AJ Watson supplied eight points apiece.

The level of play over this past weekend at the Cattle Classic was fine and all, but the GPAC is clearly a step up in competition. Dating back to last season’s thrilling finish, the Bulldogs have now won eight-straight games against conference opponents.

“The GPAC’s a great conference,” Kent said. “If you don’t bring it every night, you can easily get beat. We just pride ourselves on winning each day. We knew we had to bring it tonight and bring the energy and just play together.”

Smith has taken well to his new role as a starter. After pulling down 30 rebounds over the weekend’s two wins, the Elizabeth, Colo., native grabbed 12 more boards on Tuesday (to bring his season total to 56). He’s already notched three double-doubles this season.

Midland (0-2, 0-1 GPAC) got most of its scoring from its reserves. The starting five for the Warriors went a combined 6-for-35 from the floor. Head Coach Oliver Drake used three timeouts very early in the game, but it failed to jumpstart Midland’s shooting efforts. Limback gave a lot of credit to Kent and Wiersema for their work on the defensive end. The Warriors were paced by the 12 points apiece from Kyle Castille and Emanuel Bryson.

Said Limback, “To have our identity coming into conference that we’re going to guard you and give tremendous effort – if we do that it puts us in a position to be very successful in our league.”

Conference action will continue inside Friedrich Arena on Saturday when Northwestern (2-0, 0-0 GPAC) visits Seward for a 4 p.m. CT tipoff. The Bulldogs defeated the Red Raiders (20-12 in 2019-20) three times last season. Northwestern was picked second in the GPAC preseason poll and is receiving votes nationally.