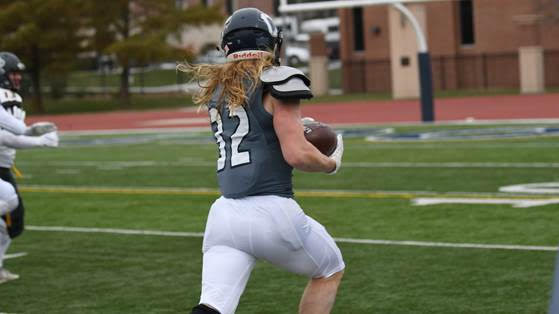 SEWARD, Neb. – The Concordia University Football program has learned it still has work to do in order to knock off one of the GPAC’s upper echelon teams. Quarterback Noah Clayberg and Dordt were too much for the Bulldogs in what was dubbed as the NAIA National Game of the Week on Saturday (Oct. 24). The Defenders used 497 total yards in bowling over Concordia, 41-14, in Seward.

Dordt had not previously won at Bulldog Stadium during its program history that dates back to 2008. Head Coach Patrick Daberkow’s squad slipped to 4-2 having also lost last week at Northwestern.

“Today was a headscratcher for us,” Daberkow said. “We thought we prepared better than it showed, but we obviously didn’t, so we have work to do. We just took one on the chin today. They were a better football team than us.”

This certainly looks to be the most complete team that the Defenders (5-1) have ever fielded. The combo of Clayberg and play-making receiver Levi Jungling is a handful for any opponent. Jungling put on a show with plenty of highlight-reel worthy grabs included in his nine-catch, 119-yard day. He put an exclamation mark on the performance by hauling in a 22-yard touchdown pass from Clayberg over a pair of Concordia defenders. At that point, the Defenders led 27-7 midway through the third quarter and were well on their way to victory.

In last week’s close loss to the Red Raiders, the Bulldogs managed to come up with a series of key stops in the red zone. On this particular day, Dordt scored on all six of its red zone advancements with four ending on touchdowns. When Clayberg did throw the ball up for grabs, Concordia was unable to come up with the big play. The Bulldogs, who played without starters in sack leader Chase Hammons and tackle leader Lane Napier, failed to force a turnover.

Down 20-0 after being outgained 303-56 in the first half, the Bulldogs managed to briefly pick themselves up off the mat. That’s when they put together their best drive of the day. It covered 76 yards in eight plays and concluded with Korrell Koehlmoos reeling in a 24-yard touchdown pass from Blake Culbert. However, Dordt reasserted control with two more touchdowns before the close of the third quarter.

Clayberg threw for 268 yards and three touchdowns and ran for 99 yards and another score. Clayberg and the vaunted Defender offense have hit 40 or more points in five-straight games. The only consolation for Concordia’s defense in a rough opening half was forcing the two field goal attempts. Now it’s back to the drawing board for the Bulldogs.

Said Daberkow, “We need to get healthy. That will help. We have some time to heal up. We have to watch the tape and see the spots where we went wrong and see if we can find any consistencies in the mistakes we were making. I didn’t have our team prepared enough to face Dordt today.”

The sledding has gotten tougher for the Concordia rush offense (2.7 yards per carry on Saturday). However, it was a nice day for backup running back Lyle Whitney, who gave the Bulldog faithful something to cheer about in the fourth quarter when he caught a short swing pass from Wyatt Ehlers and raced 57 yards to the end zone. Whitney also ran 12 times for 57 yards. In the passing game, Culbert went 7-for-17 for 92 yards before giving way to Ehlers late in the contest. At tight end, Garrett Schardt (three catches for 48 yards) continues to produce.

In other noteworthy efforts for the Bulldogs, linebacker Shayne Campbell led the team with 13 tackles while Caydren Cox made seven stops, including one for loss. Koehlmoos racked up 202 kickoff return yards (long of 41) on seven attempts, in addition to the touchdown catch. Meanwhile, the Dordt defense collected four sacks.

Concordia will have a bye next Saturday (Oct. 31), which was part of the original schedule. The Bulldogs will resume action on Saturday, Nov. 7 when they will host Morningside (5-0) at 1 p.m. CT. Concordia will honor its senior class prior to kickoff.