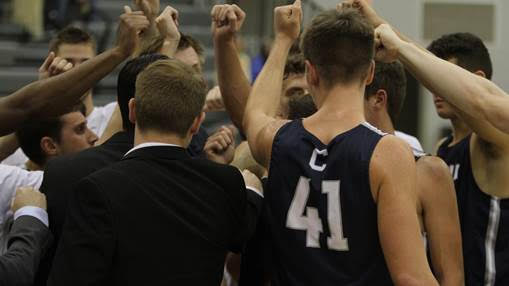 HASTINGS, Neb. – The Concordia University Men’s Basketball program is back in action after earning a berth in the 2020 NAIA Division II national tournament. Unfortunately, the Bulldogs went cold offensively in the second half on Friday (Oct. 30) evening and fell at the hands of Kansas Collegiate Athletic Conference member Tabor College, 72-69. Both teams are taking part in the two-day Hastings College Classic at Lynn Farrell Arena.

In year eight as head coach, Ben Limback is breaking in three new starters to compliment a backcourt stocked by juniors Carter Kent and Justin Wiersema.

“We weren’t in a very good rhythm offensively and had too many turnovers,” Limback said. “Their athleticism and switching really bothered us. You have to give some credit to their defense. They really turned it up after we were up 15 or 16. We kind of coasted and weren’t as aggressive. They give us some problems with their athleticism. We have to adjust to it better.”

Late in the first half it was looking like Concordia just might cruise to victory. It led by as many as 16 points (28-12) after Wiersema splashed home three of his team high 16 points. The Bulldogs still led by eight (38-30) at halftime and owned a one-point advantage in the final minute before the outcome slipped out of grasp. The Bluejays (1-0) and transfer guard Nashom Carter were up to the task.

Carter tallied 24 points while leading the Tabor rally. Concordia endured too many empty possessions down the stretch. Its final field goal of the game came at the 4:59 mark via a Wiersema trey (64-61 lead at the time). On the other end, Carter poured in six of his team’s last eight points. His pair of free throws in the closing seconds provided the final tallies. The Bulldogs had one crack at forcing overtime, but Sam Scarpelli’s trey just before the buzzer rimmed out.

Concordia shot 38.3 percent (23-for-60) for the game and committed 22 turnovers. It slipped to 30.3 percent shooting in the second half when it went just 4-for-18 (.222) from 3-point range. There will be better shooting performances ahead for the likes of Kent (2-for-11) and Scarpelli (2-for-13), two central figures in the backcourt. The consistent Wiersema netted 5-of-7 shots from the floor and grabbed five rebounds.

There are mistakes to be cleaned up. The good news is the Bulldogs will be right back to action on Saturday. Said Limback, “We have to learn from this and execute better. You expect some sloppiness in the first game out. I thought Justin was very good in the second half and Cory Davila did some nice things out there. The positives have to come tomorrow where we learn from this and grow from this.”

Tabor struggled last season, but it has some new pieces in place like Carter. Andre Nelson (game high 13 rebounds) and Bobby Shanks also reached double figures with 10 points apiece. The Bluejays shot 55.6 percent (15-for-27) from the floor in the second half to boost their overall percentage to 42.2 (27-for-64).

Another KCAC foe is on tap for Saturday at Hastings. Concordia and Friends University (Kan.) will tip off at 2 p.m. CT. The Bulldogs defeated the Falcons, 74-69, at the same event a year ago.