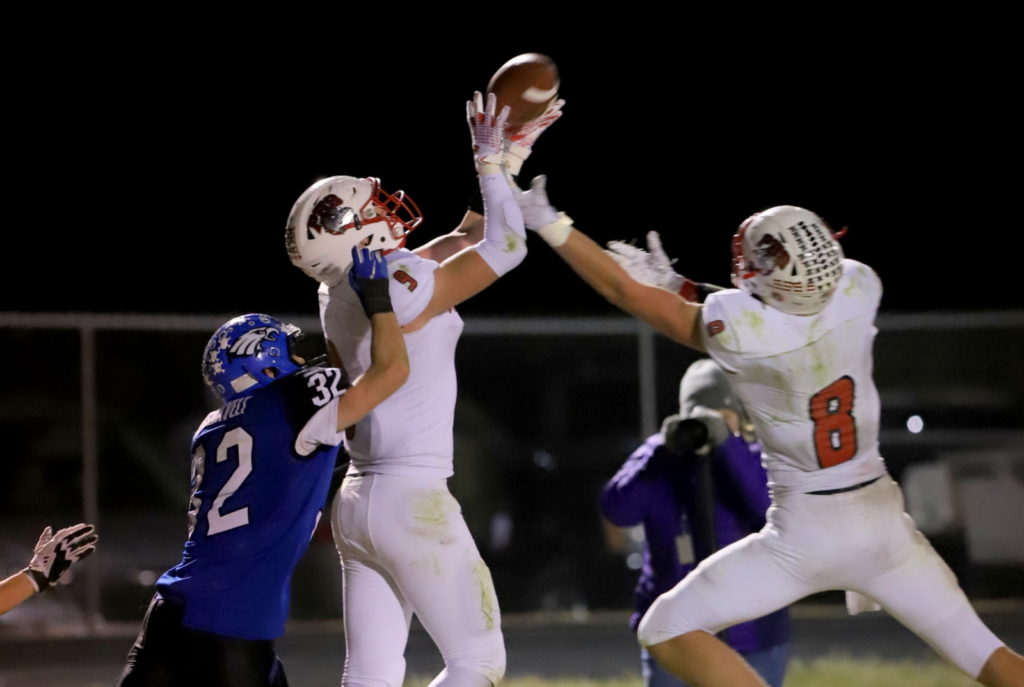 OVERTON – The Overton Eagles struggled to overcome self inflicted wounds and fell to Pleasanton, 12-6 in the D2 semifinals. With the win, the Bulldogs will play in the state championship game for the first time in school history.

Overton got off to a fast start, scoring on their third play from scrimmage. Ryan Lauby scored from 55 yards out to give the Eagles a 6-0 lead. However, things would quickly go downhill for Overton.

Pleasanton forced a Eagle fumble at the five yard line as Elijah Heusinkvelt tried to find the endzone. The Bulldogs failed to move the ball and trailed, 6-0 at the half. On the first drive of the second half, Overton would get their punt blocked and the Bulldogs recovered at the one yard line. The Eagle defense would stand tall and forced Pleasanton to turn it over on downs after four failed attempts to score from the one yard line.

The Bulldogs would get on the scoreboard on the ensuing Overton after a fumble by QB Ryan Johnson. Linebacker, Jakson Keaschall scooped and scored from the 17 yard line to tie the game at six. The turnover whoas continued as Overton turned the ball over on their next drive on another Heusinkvelt fumble. Yet again, the Eagle defense answered and held their ground.

In the fourth quarter, Overton botched a punt as the snap sailed to the four yard line where Pleasanton eventually recored. The Bulldogs made the Eagles pay on another miscue as Keaschall ran in for a one yard touchdown to give Pleasanton their only lead of the night.

After a missed 25 yard field by the Bulldogs and only down by six with minutes remaining, Overton threw an interception in the waning seconds as Brady Klein picked off Johnson.

The four turnovers and multitude of miscues  would be the demise for Overton, despite rushing for over 300 yards as a team. Heusinkvelt and Lauby each ran for 147 yards. Johnson completed one pass for 10 yards. The Eagles committed 11 penalties for 72 yards.

Pleasanton’s offense struggled all night long, but did just enough for the win. The Bulldogs were negative 15 rushing yards while passing for 88 yards. They also committed nine penalties for 73 yards.

Overton ends the year at 8-4 while Pleasanton improves to 10-2 and will play Humphrey St Francis for the D2 title on Monday at 2:45 p.m.