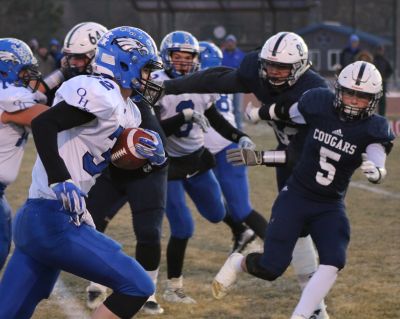 Wolbach-Ryan Lauby rushed for 131 yards and scored on a 71 yard run right before half to help lift Overton to a 22-14 win over Central Valley in the Class D2 State Football quarterfinals. The Eagles led 22-6 at half and made a couple of late defensive stands to hold off the Cougars who were undefeated on the season. After entering the playoffs at just 5-3, Overton has now won back to back road games over previously undefeated teams. The Eagles are now in the state semis for the first time since 2013. They face FKC rival Pleasanton who beat Twin Loup 34-24 on Tuesday. Pleasanton is making its first appeareance in the semifinals since 2007. Monday’s game is set for 6pm in Overton and that game can be heard on 880 KRVN and 106.9 in Kearney.