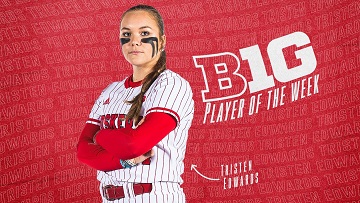 The Murrieta, Calif., native was spectacular in Nebraska’s opening weekend at the Troy Cox Classic in Las Cruces, N.M last weekend. Edwards started all five games and led the team at the plate going 7-for-16 (.438) with nine runs and five RBIs. She drew five walks to finish with an on-base percentage of .550 and slugged 1.313 with two doubles and four homers. The four home runs brings her career total to 35 which is tied for sixth in school history. Additionally, her six extra-base hits on the weekend brings her career total to 70 which ranks eighth in school history. As a team, Nebraska went 3-2 on the weekend beating UTEP twice and Bradley. The Huskers fell to New Mexico State and No. 20/24 Arkansas.

Edwards and the Huskers are back in action on Feb. 14 when they take on Georgia Tech on Feb. 14 in Atlanta, Ga., as part of the Big Ten/ACC Challenge. First pitch is set for 3 p.m. CT.