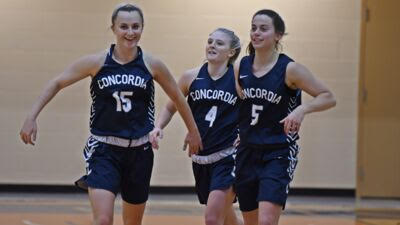 FREMONT, Neb. – This game could not have been more different than the meeting that unfolded a month earlier inside Friedrich Arena. A re-commitment on the defensive end in the final quarter paved the way for the Concordia University Women’s Basketball team’s most impressive road win of the season. In action on Tuesday (Dec. 15) night, the Bulldogs avenged a Nov. 10 defeat and won, 67-59, over one of the strongest Midland teams in several years.

This was the response 15th-year Head Coach Drew Olson hoped for during a run of difficult road outings. After back-to-back losses in Sioux City pit stops, Concordia (7-5, 6-3 GPAC) got back into the win column.

“I loved our fight,” Olson said. “It just shows the toughness that our team has at times. We’re still learning and growing. That third quarter we kind of lost our heads a little bit with what we needed to do defensively. We allowed a lot of penetration and we left shooters. They got hot for a little bit, but I thought we responded really well, refocused and had a great fourth quarter.”

The fourth quarter was a complete reversal of the third. While making 6-of-9 attempts from 3-point range in the third period, the Warriors (9-3, 6-3 GPAC) erased what had been a 37-25 halftime deficit. Over the final stanza, the Bulldogs held Midland to 3-for-10 shooting and outscored the home team, 19-7. A three-point play by Rylee Pauli and a trey from Taylor Cockerill jump-started the attack to begin the final quarter.

This was a grittier, more defensive-minded battle than the one the Warriors claimed at Concordia, 91-79, in this season’s first matchup. Midland shot 35.7 for the game and was 0-for-4 from long range over the final 10 minutes. The Warriors somehow managed only one measly point over the last five minutes of the contest. Bulldog freshman Taysha Rushton put her side up for good (61-59) with a clutch 3-pointer down the stretch. She then salted the game away with four free throws in the closing 30 seconds.

“They were hitting threes and we just had to come together and play as a team,” Pauli said. “We had to stay focused … Each win we keep finding ourselves and keep playing as a team.”

In a reserve role, Pauli provided a solid inside presence in scoring 13 points on 6-for-8 shooting from the floor. Cockerill led all players with 17 points while adding six rebounds in 31 minutes. Rushton finished with 14 points and four assists. Mackenzie Koepke got the start and grabbed a game high nine rebounds.

In the first go-round, Lexis Haase scorched Concordia with 24 points. She was limited to five points on 2-for-9 shooting on Tuesday. Peyton Wingert paced Midland with 16 points and seven rebounds. Sam Shepard and Katy Gathje chipped in with a dozen points apiece.

Two additional keys on Tuesday were the hot start for the Bulldogs and a plus-eight margin in turnovers. Rough opening quarters at Briar Cliff and Morningside had forced Concordia to play catch up for the entirety of those defeats. This was a definite step forward for the growing Bulldogs.

“I think it just showed our team’s competitiveness and the confidence they had coming into this game that they weren’t going to be bothered by the past,” Olson said. “They were coming with good intent and it showed in that first quarter.”

The longest road trip of the regular season is coming up on Friday when Concordia will be at Jamestown (6-3, 4-3 GPAC) for a 6 p.m. CT tipoff in North Dakota. The Jimmies toppled Briar Cliff at home, 78-62, on Tuesday. Jamestown is 5-2 at home this season.