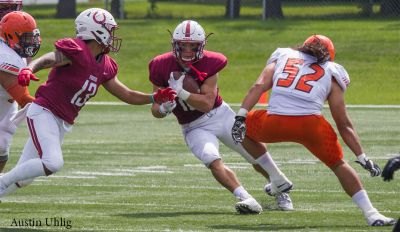 HASTINGS, NE – The Hastings College Bronco football team was able to come away with victory number two after a 38-21 win over University of Jamestown Jimmies on Saturday afternoon.

The Broncos (2-0, 1-0) won the coin toss and elected to defer to the Jimmies. The Jimmies (0-3, 0-1) started the game with the ball, but after a 7-play drive that eventually went backwards due to a chop block penalty resulted in an early punt. The Broncos start their first drive with a nice 6-yard pick up by Brett Simonsen (FR/Sutton, NE). Two incomplete passes force the Broncos to also punt the ball early on.

After the Broncos forced a 3-and-out, the Jimmies are forced to punt for the second time in their first two drives. The Broncos drive the ball 74-yards on 12 plays, as they are able to score off a 3-yard rush from Simonsen. A fumble off a punt from Jamestown almost turned the ball over for the Broncos. A recovery by Chris Rodriguez (SO/Houston, TX) and a Pass Interference call on the Jimmies defense allows the Broncos to drive the ball 67-yards and score off an Isaiah Jackson (SR/Compton, CA) to QB sneak into the end zone putting the Broncos up 14-0 with 10:27 left in the first half.

Jamestown University had no luck moving the ball on their next possession, going 3-and-out and forced to punt the ball back to the Broncos. A nice 46-yard return by Patten sets up the Broncos on Jamestown’s own 47-yard line. Two big 15-yard plays, first a run by Jesse Ulrich (FR/Ord, NE) and then a pass from Jackson to Keiotey Stenhouse (SR/Pacoima, CA) helps set up a 1-yard Touchdown rush by Ulrich to put the Broncos up 21-0 with just under 6 minutes left in the half.

The Broncos were able to recover a fumble on the kick off takeover on the 39-yard line. After a Personal Foul penalty on the Jimmies, the Broncos set up 1st and 10 on the Jimmies 24-yard line. Just two plays later and Jackson throws a pick at the 12-yard line looking for Stenhouse. The Jimmies use the momentum that’s on their side and drive the ball 83 yards and capitalize on a wide open 21-yard touchdown pass by Jamestown with only :36 left in the first half.

Coming out of halftime, the Broncos were able to keep putting scores on the board. After another Pass Interference on the Jimmies and a Jackson to Stenhouse 23-yard pass helps set up a Jason Bachle (FR/Grand Island, NE) 32-yard Field Goal.

The Broncos allow another big return on the kickoff allowing Jamestown to the 48-yard line, were the very next play the Jimmies are able to connect on 52-yard touchdown pass to bring the Jimmies down 10, 24-14 with 10:48 left in the 3rd quarter.

No luck on the following drive for the Broncos, as they are forced to punt back to the Jimmies after four plays. A great punt from Ryan Hunter (FR/Aurora, NE), pins the Jimmies on their own 13-yard line. Penalties hurt the Broncos on this drive as they picked up three 15-yard penalties, two pass interference, and a facemask helps Jamestown to be able to score off a 6-yard touchdown to make it 24-21.

As the Broncos look to milk the clock, they are able to put together a 12 play, 55-yard drive to set up Bachle to hit his third field on the day, this one a 38-yarder to make it 30-21.

The following drive by the Jimmies was composed of a -4-yard pass that was blown up by Tydus Clay (SO/Conroe, TX) and Tyler Kennedy (SR/Chandler, AZ), and incomplete pass, and a fumble that was forced and recovered by Keyuntea Kinney (JR/Marietta, TX) at the Jimmies 12-yard line

Took the Broncos three plays to punch the ball in as Ulrich runs it in to extend the lead to 36-21. A two-point conversion pass from Jackson to Anthony Martinez (SR/Oceanside, CA) is good to push the lead to 38-21.

The Broncos will be back in action next weekend as they take on Concordia University on September 21st. Kickoff is scheduled for 1 p.m. CST.