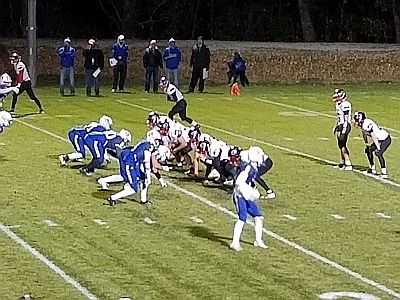 Ashland-Cozad’s season came to an end on Friday as they lost to Ashland-Greenwood 53-14 in the first round of the Class C1 State Football Playoffs. The Bluejays led just 13-7 at the end of the first quarter, but forced a Cozad fumble at the Haymaker 21 yard line and that started a big second quarter. Cozad actually took a brief lead in the first quarter on a 45 yard touchdown run from quarterback Nolan Wetovick. Cozad trailed at the half 26-7 and were never able to get back in the game. Ashland-Greenwood’s Bryce Kitrell had a big night as he returned two punts for touchdowns, he rushed for over 150 yards and had four touchdowns on the night. Cozad ends the year at 5-5, Ashland-Greenwood is now 10-0 on the season.