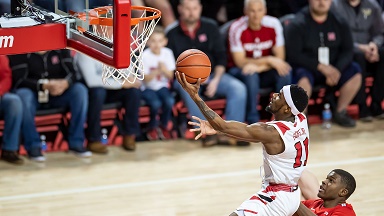 Lincoln – Dachon Burke Jr. and Cam Mack combined for 25 points, but No. 23 Ohio State rode a hot start until a 75-54 win over Nebraska Thursday evening.

Ohio State used a blistering start from Washington, who scored all 14 of his points in the first half, to take a 43-27 lead at the break.

Washington, who was 4-of-18 from 3-point range in the previous three games, hit his first three shorts beyond the arc, as the Buckeyes hit nine of their first 11 shots from the floor en route to building a 28-12 lead. The Huskers battled back, using a 8-2 run to pull within 30-18 after a Burke basket with 6:29 left in the half.

The Buckeyes used a 9-0 run to stretch the lead to 21 before Nebraska ran off seven straight points to climb within 39-25 with 1:16 left in the half.

Nebraska (7-21, 2-15 Big Ten) got to within 14 twice in the opening minutes of the second half, the last being at 47-33 after a Burke bucket, but the Buckeyes, who shot just 33 percent in the second half, were unable to slice into the deficit. Wesson had a double-double in the second half alone, finishing with 10 points and 13 boards in the final 20 minutes to help OSU to their six victory in the last eight contests.

NSAA activities canceled for the remainder of the school year