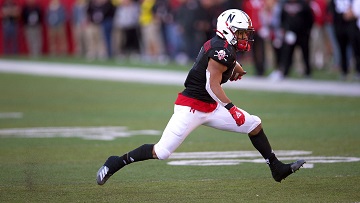 Lincoln, Neb. — The Nebraska football team practiced for just over two hours Wednesday morning outside on the Ed and Joyanne Gass practice fields.

Offensive Coordinator Troy Walters addressed the media following the conclusion of practice and talked about the balance of throwing screens and deep passes.

Can Nebraska Get Back on Track Verse Purdue? Weekly HuskerChat w/ Sean Callahan

“Really in this offense we want to be able to stretch the defense, put stress on the defense with long throws, as well as short throws,” Walters said. “The screens, they have to cover the entire field so with a JD [Spielman] and a Wan’Dale [Robinson], you get the ball in their hands right at the line of scrimmage, they can make something happen. It also helps the line out, to get the ball out of the quarterback’s hands, they don’t have to protect every play for three or four seconds. It changes it up, keeps them on their heels as to what is going on. So the screen game is definitely a huge part of this offense. Then when they stop the screens, they’re up on the line of scrimmage [and] now it creates those opportunities to go deep.”

Walters went on to talk about Wan’Dale Robinson and just his toughness as a receiver.

“He doesn’t seem like a freshman, and he doesn’t seem like a 5-9, 175-pound freshman,” Walters said. “He plays tough, with an attitude, he’s not afraid to run over a guy, he understands the game, the situations when he needs that extra yard. He puts his head down, and I’m very pleased with his performance. This weekend at Purdue it’s going to be another tough game, they fly around, play hard so we’re going to need more performances like that from him and other guys on the offense.”

Walters also discussed his standards and expectations for the wide receiver group.

“We told them the standard is the standard,” he said. “When things aren’t going your way, we try to teach life lessons. If things aren’t going your way in life you can’t quit. You have to just keep plugging, keep grinding, keep doing the things that are going to help you be successful. I also told them we have four more games, guaranteed, and let’s make this the best four games, individually, of the year or season and collectively.

“The guys have done a great job responding, being dialed in. No one has checked out. We all want to win these next four to guarantee a fifth game and then win a bowl game and finish this season off the right way. They understand that, and they understand when their number is called they have to be ready to go.”

Walters went on to talk about how the offense has been at its best when it has limited penalties and negative plays.

“We had four clean series [against Indiana], where we didn’t have a penalty, didn’t have a turnover, there was less than three tackle for losses. When we had a clean series, we scored four times,” Walters said. “When we don’t beat ourselves, we’re pretty good. Now the goal is when we do have a penalty or mistake, which could happen, we have to overcome that. If you get in a 1st-and-15 we have to find a way to overcome that and score touchdowns. When we’re clean and we don’t beat ourselves, we’re a pretty good offense. We have to continue to just master the fundamentals and not beat ourselves.”

Nebraska will take the practice field again tomorrow morning in preparation for the matchup against Purdue. Saturday’s game will begin at 11 a.m. central and will be televised on FOX. Fans can also listen to the game on the Husker Sports Network.