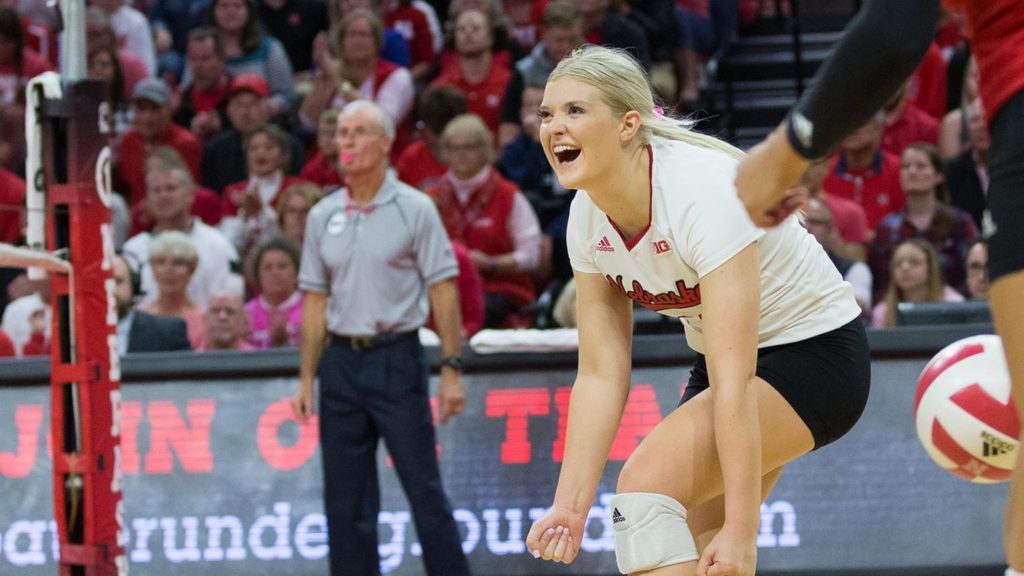 Match Notes
• The No. 5 Nebraska volleyball team hits the road for a 7 p.m. (CT) match at Maryland on Saturday in College Park. The Huskers’ eighth Big Ten match of the season will be streamed on the BTN+ app and BTNPlus.com.
• Saturday’s match can be heard on Husker Sports Network radio affiliates, including 107.3 FM in Lincoln and AM 590 in Omaha. A live audio stream will be provided at Huskers.com and also on the official Huskers app. John Baylor is in his 26th season doing play-by-play for the Husker volleyball program. Lauren (Cook) West, a former All-America setter for the Huskers, will provide color commentary.

About the Huskers
• Nebraska is 14-2 (6-1 Big Ten) after a 3-1 win over No. 20 Purdue on Wednesday at the Devaney Center.
• The Huskers have held three straight Big Ten opponents under .100 hitting, and all three hitting percentages were season lows. The last time Nebraska held four consecutive conference opponents under .100 hitting was in the Big 12 in 2000, John Cook‘s first year at Nebraska.
• Nebraska has won 44 straight matches against unranked opponents dating back to 2017.
• The Huskers have won nine road matches in a row dating back to October of last season.
• Nebraska ranks first among Big Ten teams with a .137 opponent hitting percentage, the fifth-best mark in the nation.
• In conference play only, Nebraska is hitting .290, the second-best mark in the conference.
• Lexi Sun leads the Huskers with 3.53 kills per set and is hitting .289 on the season. Sun has double-doubles in her last three matches.
• All-America middle blocker Lauren Stivrins averages 2.48 kills and 1.09 blocks per set while hitting a team-best .402 this season. She has a Big Ten-leading .567 hitting percentage in conference play.
• Jazz Sweet is putting down 2.72 kills per set on the season, including a 3.24 average in conference play.
• Freshman Madi Kubik adds 2.41 kills and 2.45 digs per set. She had a career-high 22 kills in the win over Purdue on Wednesday. Her 22 kills on .314 hitting tied Mikaela Foecke’s 2015 freshman high of 22 as the most by an NU freshman since Sarah Pavan had 35 in 2004.
• Nicklin Hames provides 10.72 assists per set and 2.86 digs per set. She has eight double-doubles on the season, and in conference play only she is second in the Big Ten in assists per set at 11.84.
• Callie Schwarzenbach leads the team in blocks at 1.15 per set, and she ranks second in the league in blocks during Big Ten matches with 1.36 per set.
• Freshman libero Kenzie Knuckles is leading the Huskers in digs with 3.87 per set this season.

Scouting Maryland
• Maryland has a team hitting percentage of .234 this season and is allowing opponents to hit .174.
• The Terrapins have 136 aces this season, which leads the Big Ten and is 38 more than the next closest team (Michigan, 98).
• Erika Pritchard leads Maryland’s attack with 3.33 kills per set.
• Katie Myers ranks first in the conference and 16th nationally in blocks with 1.40 per set, and she adds 2.32 kills per set. on .416 hitting this season, the No. 3 mark in the Big Ten and No. 15 nationally.

Three Huskers Named to Preseason All-Big Ten Team
• Nicklin Hames, Lauren Stivrins and Lexi Sun were all voted to the 14-player preseason team by the conference’s head coaches. Additionally, the Huskers were picked second in the preseason poll behind Wisconsin. Minnesota was third.
• Stivrins, a Scottsdale, Arizona native, had a breakout sophomore season to earn first-team All-Big Ten and first-team AVCA All-America honors in 2018. The Huskers’ co-captain averaged 2.36 kills per set and had a hitting percentage of .421, the third-highest mark in school history and the No. 3 mark in the nation last season. Stivrins was selected to the NCAA Championship All-Tournament Team after a career-high 19 kills on .615 hitting in the championship match against No. 1 Stanford.
• Hames, a sophomore from Maryville, Tennessee, set the Huskers to the NCAA Championship match as a true freshman. The Huskers’ co-captain finished the season with 10.49 assists per set and 3.32 digs per set, along with 40 service aces, second-most on the team. Hames had 25 double-doubles during the 2018 season, which broke Jordan Larson’s school record for double-doubles. She tallied a career-best 62 assists in the NCAA final against Stanford with 12 digs.
• Sun, a junior from Encinitas, California, is Nebraska’s top returning kills leader. She averaged 3.11 kills per set and 2.69 digs per set in 2018, her first season as a Husker. Sun was one of NU’s top servers with 30 aces on the season, and she played a big role for the Huskers down the stretch with 19 kills and 12 digs in the NCAA Semifinal win over Illinois.

“29,029” and “To Be Continued…”
• The 2019 Nebraska volleyball team has two slogans for the season: 29,029 and To Be Continued…
• 29,029 is the elevation in feet of Mount Everest. The Huskers, who nearly reached the peak of college volleyball in 2018 before coming up three points short against Stanford, are using the memory of that defeat to motivate them in 2019. The Huskers will play 29 regular-season matches, and head coach John Cook said the hardest part of climbing Mount Everest is the final 29 feet. “Many people say the elevation is 29,000 feet, forgetting the final 29 feet. We got to that 29,000 (in 2018). We didn’t get that last 29 feet. All the bad things happen in the last 29 feet. People mentally let go, they’re exhausted, they get stuck. Our whole theme is we’ve got to figure out how to get the last 29 feet.”
• The Huskers also have a team slogan of “To Be Continued…” in 2019. The slogan references the Huskers continuing what they couldn’t quite finish in 2018 – winning an NCAA Championship. It also means carrying on the recent success of the program (four straight NCAA Semifinals appearances) and preparing to bring back the entire team for the 2020 season, as the Huskers have no seniors on their roster for the first time in program history. The ellipsis signifies the three points that separated the Huskers from a national championship in 2018.

Foecke and Maloney Leave Big Shoes to Fill
• This year, the Huskers are without two players who led the program to four straight final fours from 2015-18 in Mikaela Foecke and Kenzie Maloney. The All-Americans both graduated, leaving big production to replace at outside hitter and libero. Foecke and Maloney won two NCAA titles, two Big Ten titles and won more postseason matches than any other player in Husker history.
• Stivrins, Hames and Sweet are among 10 returning players who are being counted on to step up for the Huskers. Jazz Sweet also returns to lead the Huskers on the right side, and sophomore Callie Schwarzenbach is back after breaking the Nebraska freshman record for blocks last season with 177. Sophomore hitter Capri Davis played a big role last year coming off the bench, and sophomore Megan Miller and Hayley junior Densberger both have a plethora of experience in the back row.
• A group of six freshmen help offset the loss of the most decorated senior class in school history. Three of the six newcomers – outside hitter Madi Kubik, middle blocker Riley Zuhn, libero Kenzie Knuckles – were PrepVolleyball.com All-Americans and ranked among the top 40 prospects in the 2019 class. The Huskers’ incoming class was ranked No. 2 by PrepVolleyball.com.

Huskers Visit Asia in Summer of 2019
• The Nebraska volleyball team took a 17-day trip to Japan and China over the summer. The Huskers took on top professional teams from the two countries during the trip, winning about half of the sets they played. Head Coach John Cook called it “by far the best” of the five trips his teams have taken to Asia in his 20 years at Nebraska.
• In addition to the highly competitive matches, the Huskers also toured numerous sites in Asia, including the Forbidden City, Tiananmen Square and the Great Wall of China. With six newcomers and no seniors on the roster for the 2019 season, the trip was a great opportunity for the team to bond on and off the court, a team that will spend the next two years playing together.
• The NCAA allows a team to take a foreign trip every four years, and Cook has made it a habit to take his team to Asia. Previous trips have usually paid off with successful seasons. In the last four seasons following a Cook-led foreign trip, Nebraska has responded by winning three conference titles and two national championships.
• Cook took his first team to Asia prior to the 2000 season, his first as Nebraska’s head coach. The Huskers responded with a 34-0 season and the program’s second national championship.
• In 2006, Cook took his team back to Asia and the results were the same: another national championship. The Huskers went 33-1 following their international trip and capped the national title with a 3-1 victory over Stanford in front of 17,209 fans at the Qwest Center in Omaha.
• Nebraska went back to Asia in 2010. Although NU did not win the national title that year, it did put together a 29-3 season that included a Big Ten title. Nebraska took a No. 3 ranking into the NCAA Tournament but was upset in a four-set loss at No. 11 Washington in the NCAA Regional Semifinal.
• The Huskers’ last Asia trip in 2014 with only one senior was followed by a 23-10 season. But the following year saw that young group go on to win the program’s fourth national title.

Nebraska Fans Continue Record-Setting Consecutive Sellout Streak
• Nebraska volleyball holds an NCAA women’s record 264 consecutive regular-season sellouts.
• Nebraska led the nation in attendance in 2018 for the sixth straight year since moving into the Bob Devaney Sports Center in 2013, averaging 8,205 fans per match.
• Nebraska has ranked in the top three nationally in attendance every season since 1990 (28 straight seasons).
• Nebraska set a new school record for attendance – 8,632 – against No. 2 Stanford on Sept. 18.

AVCA Hall of Fame Head Coach John Cook in 20th Season at Nebraska
• Nebraska head coach John Cook is in his 20th season as the Nebraska volleyball head coach in 2019. He has led the Huskers to four national championships, nine final fours, 12 conference championships and 17 top-10 final rankings since 2000.
• Cook has 735 career wins and is one of the all-time winningest coaches in NCAA history. Since taking over the program in 2000, Cook has led the Huskers to a nation-leading .880 win percentage in that time (574-78).
• Under Cook, the Huskers have achieved 55 AVCA All-Americans and 19 CoSIDA Academic All-Americans, both among the best in the nation. He is a two-time AVCA National Coach of the Year, earning the prestigious honor in 2000 and 2005, and a seven-time conference coach of the year, including Big Ten Coach of the Year in 2016 and 2017, his first and second Big Ten honors with the Huskers in their Big Ten era (2011-present).
• Cook is one of only four active coaches – and one of six all-time – to be a two-time AVCA National Coach of the Year and was honored in 2008 by USA Volleyball, receiving its All-Time Great Coach Award.
• Cook was inducted into the AVCA Hall of Fame in 2017, joining former Husker volleyball coach Terry Pettit in the hall.
• Cook became the ninth active Division I head coach to reach 700 career wins in 2018.