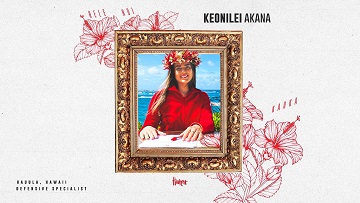 The Nebraska volleyball program has signed a fourth incoming freshman to its 2020 class. Keonilei Akana, a 5-9 defensive specialist from Hauula, Hawaii, signed her National Letter of Intent on Thursday.

As an outside hitter for Kamehameha Kapalama High School in Honolulu, Akana was named the Honolulu Star-Advertiser Player of the Year, first-team All-Hawaii and the All-Hawaii Girls Player of the Year. She totaled 378 kills and 403 digs as a senior and had 22 kills in the state title match to lead Kamehameha to a state championship for the second time. She was named the tournament’s most outstanding player.

Akana was also named a 2019 MaxPreps second-team All-American. She originally signed with USC but was released from her scholarship after a head coaching change. Akana would be the second Hawaii native ever to play for the Huskers, joining former three-time All-American Fiona Nepo (1995-98), Nebraska’s all-time leader in career assists.

“Keonilei is a big-time get for us,” Head Coach John Cook said. “Not only is she one of the best ball control players in the country in this class, she is the first Hawaiian to play for Nebraska since Fiona Nepo. We are expecting her to come in and compete for playing time in the libero/defensive specialist position from day one. I’ve always had an affection for Hawaii and the culture there. I’m excited for Keonilei to bring some Hawaiian flavor to our volleyball program. Hele aku ‘ula’ula nui (Go Big Red). Aloha.”