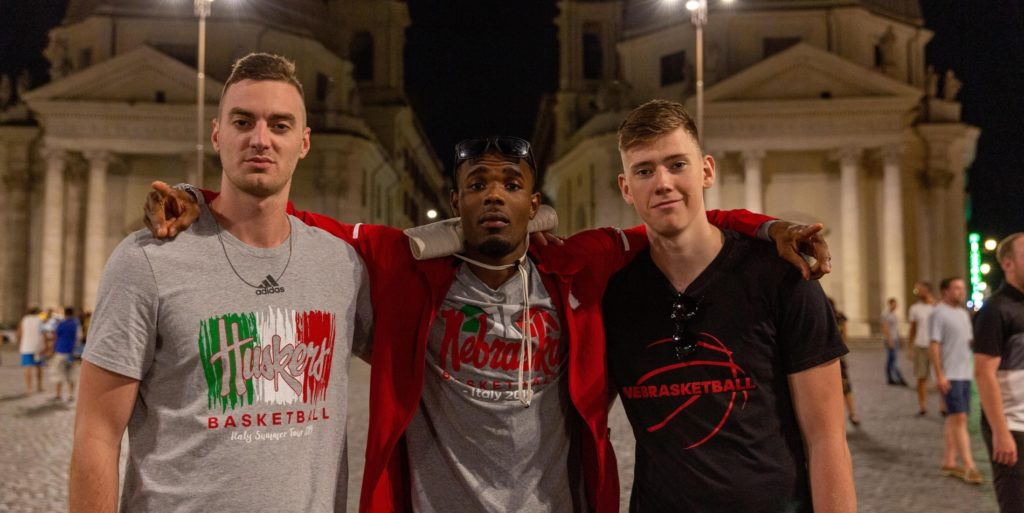 Rome – The Huskers arrived in Rome Sunday morning to begin the first part of their Italian Tour.

Sunday was a light day, as most of the travel party spent the day recovering from the overnight flight from Atlanta and adjusting to the seven-hour time difference. After arriving in Rome and going through customs, the group enjoyed a brunch at a local hotel before embarking on a bus trip of downtown. The tour allowed the group to learn more of the history surrounding the city and the important role Rome has played dating back to ancient times.

The team had most of the afternoon to themselves, so some of the players went sightseeing and shopping while others caught up on some much-needed sleep before regrouping for a dinner that featured veal, beef, pasta as well as local delicacies.

Junior Dachon Burke took over the room during the dinner, leading a toast for the travel party, as he, like most of the roster, are making their first trip to Italy.  Burke was one of the players who took advantage of the sunny skies and 90-degree temperatures to do some sightseeing and shopping.

“It was a long flight, but the scenery, people and food have been great,” Burke said. “The things I enjoyed the most were getting a chance to go shopping and watching the street performer’s fire act. I’ve never seen anything that close in person so it was a really cool experience. We had a lot of fun as a group and I can’t wait for tomorrow.”

For Burke, Monday’s game will be his first outside of practice since March of 2018, as he sat out all of last season.

Monday will be a busier day for the Huskers, as they will spend part of the day in Vatican City and play their first game of the tour against Stella Azurra Academy Monday evening.