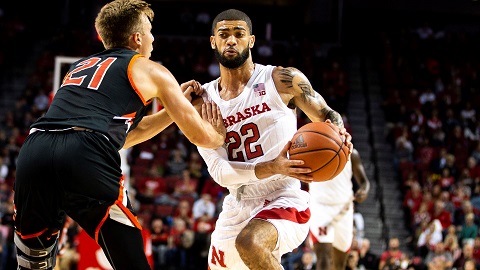 BLOOMINGTON, Ind, — Dachon Burke Jr. poured in a team-high 25 points, including a 3-pointer with two seconds left in regulation to force overtime, but Nebraska fell 96-90 at Indiana Friday night.

Four of five Nebraska starters scored in double figures. Hannif Cheatham contributed 21 points on 7-of-15 shooting. Thorir Thorbjarnarson had a career-high 17 points and was 3-of-5 from 3-point range. Cam Mack scored 15 points and dished out a team-high 10 assists. Yvan Ouedrago chipped in nine points and led the Huskers on the glass, collecting 10 rebounds.

Overall, Nebraska shot 44% (33-of-75) from the field, including 12-of-32 from behind the 3-point arc, while holding the Hoosiers to 5-of-25 shooting from long distance. The Hoosiers owned a 54 to 31 rebound advantage, however, and rode freshman Trayce Jackson-Davis’ 25 points and 15 rebounds (both career highs) to the overtime victory. For the game, Indiana shot 47% (32-of-68) from the field and attempted 20 more free throws than the Huskers, making 27-of-38 from the charity stripe.

The Huskers got off to a slow start for the second straight contest and trailed 11-2 just over three minutes into the game. The Hoosiers led 13-4 before NU rattled off 10 consecutive points, taking a 14-13 lead on a Thorir Thorbjarnarson layup at the 13:53 mark. Neither team led by more than four points the rest of the half and the Hoosiers took a 40-39 lead into the locker room. Cam Mack (10 points) lead a balanced attack as each Husker starter scored at least six points in the first half.

The second half was a back-and-forth affair. Indiana stretched the lead to eight (71-63) with a little over four minutes left in the contest, but the Huskers fought back before Burke’s 3-pointer found the bottom of the net to extend the game.

The Huskers face a quick turnaround, as they play host to Purdue on Sunday afternoon. Tipoff from the Devaney Center is set for 3 p.m. (CT) and the contest will be televised on BTN and carried on the Learfield-IMG Husker Sports Network.

Notes
*-Nebraska has now played three overtime games this season, one off the school record. Nebraska has played three of the Big Ten’s six overtime games this season as of Dec. 13.
*-Dachon Burke had a season-high 25 points, topping his previous season high of 21 against South Florida. It was his second 20-point game at Nebraska and 12th of his college career.
*-It is the second time this year Nebraska has had multi 20-point scorers, as Dachon Burke Jr. (25) and Haanif Cheatham (21) both went over 20 points. The duo also did it against South Florida on Nov. 27.
*-Cam Mack posed his second career double-double with 15 points and 10 assists. He joins Lance Jeter as the only Huskers in the last 30 years to have multiple points-assists double-double.
*-Thorir Thorbjarnarson posted a career high 17 points, his third consecutive career high, and the third straight game he has reached double figures. Thorbjarnarson earned his second consecutive start and earned the ninth start of his career, as Nebraska started its fourth different lineup in 10 games.
*-Nebraska’s 12 3-pointers tied a season best (vs. Southern, Nov. 22), while its 90 points marks the Huskers’ third 90-point game this season.