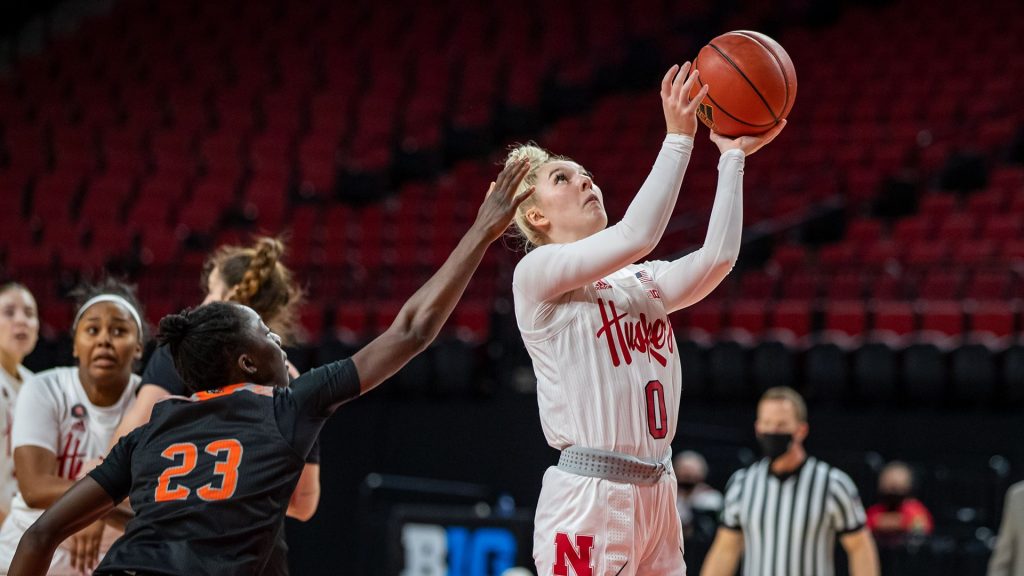 Lincoln – Ashley Scoggin erupted for 16 points on 4-of-5 three-point shooting and freshman Annika Stewart produced double figures for the second straight game, as Nebraska pulled away down the stretch for a 64-51 win over Idaho State on Sunday at Pinnacle Bank Arena. The Huskers improved to 2-0 on the young season, while handing the Bengals (1-1) their first loss. Scoggin, a redshirt sophomore transfer from Salt Lake City Community College, got the Husker offense started in both halves to bounce back from a scoreless Big Red debut as a starter in Friday’s 90-61 win over Oral Roberts. The 5-7 guard from Dallas, Ore., scored five of NU’s first seven points in the first quarter, but Nebraska still trailed 13-12 at the end of the opening 10 minutes. Stewart, who finished with a career-high 15 points in just nine ultra-productive minutes off the bench, added a three-pointer in the first quarter before pitching in five points with another three-pointer in the second period.

Nebraska still trailed 25-24 at halftime. Both Scoggin and Stewart led the Huskers with eight points apiece in the opening half. Nebraska’s defense held Idaho State to just 29.7 percent (19-64) shooting from the field, including just 5-of-24 threes (.208), which was an impressive feat considering the Bengals feature a pair of shooters who have knocked down better than 40 percent of their threes over full seasons for ISU. One of those shooters was All-Big Sky guard Estefania Ors, who hit 3-of-6 threes and finished with a double-double with 11 points and 10 rebounds. Another was Dora Goles, who added 10 points. Explosive guard Diaba Konate put three Bengals in double figures with 10 points, five rebounds and four steals. Nebraska returns to home action on Thursday night by opening Big Ten Conference play against Illinois. Tip-off with the Fighting Illini is set for 7 p.m.